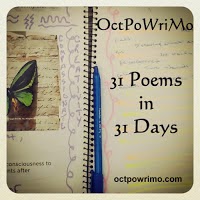 It's odd, I haven't written in free verse in years (used to write in nothing but free verse. Well, consistently written in free verse in years. There is the occasion day where I just write, in whatever comes out will be. I have gotten into writing in various poetic forms in the last few years. When I first started writing poetry I LOVED free verse and loathed having to be bound by constraints of the various poetic forms. Feels a touch strange to admit that I prefer the form of sonnets, triolets, pantoums, haiku, etc after coming from writing most of my poems in high school and college as free verse poems. Not that I hate free form; I don't! I just find that lately, I get better and clearly ideas when I have a prescribed number of syllables or a rhyme scheme to work with.

Oh, course lately I don't always have the time to just plain write in free form. Today, I broke that trend and took today's prompt and wrote for 10 (well, 7 minutes) in free form poetic phrasing. The following poem resulted. I tweaked the end, as it needed a better ending and cleaned up the language some. Its relaxing in a way to just write and go with it. I need to remember to at least free form write poetry every once and a while, even if it never sees the light of day or the internet.  Blitz poetry in the closest poetic form to free form/verse.

Poetry Prompts: I choose to believe in magic, I think it makes life more interesting. Whether it is the magic of life, synchronicities, or another magical event, write for ten minutes about magic, possibilities and mystery and see where it takes you.

Do you believe in magic?

Have you ever followed synchronicities to see where they would lead?

OctPoWriMo Blog Hop here to visit with other poets.

I believe in magic
Don’t you see?
I believe
In the pot of gold at the end of the rainbow
Or
The that rainbows are the backs of dragons.

I believe in the immaterial
Not that you can see--
The unseen
The unknown
That unicorns exists
and dwarfs are really six feet tall.

I believe in the legends
The fairy tales--
The captivating and enchanting
Both Old and New
From the brothers Grimm
To the likes of
Gaiman and James Owen.

I believe in the
The dreamers,
Scientists,
Poets,
Painters,
And philosophers.
These are seekers of truth
In all the seen
And unseen.

Through them
We believe in
The unicorns,
Faeries,
Police boxes
Dragons,
Lightsabers,
And starships.

And thus,
The world is a little better
Having seen the
Magic therein.
Posted by Here, There be a Writer at 12:07 PM