I recently discovered a Netflix show, a Sci-Fi anthology based show, written and directed by Charlie Brooker, that so blew away my expectations of what is scary and what is possible. I am familiar with Brooker's previous works, Newswipe and Screenwipe that explain how the news, TV, and movies are presented to the public.

His approach to this show is different, and yet ultimatley familiar. Brooker make everything direct and ultimately funny, even if it the subject matter if not funny. He makes it real! He makes it scary.

A four season show, much of which Brooker has written, directed, and executive produced started in 2011 and take you for a ride. It's like a modern of the Twilight Zone, that features humans are the cause for the cruelty foisted upon themselves, usually. I would say Black Mirror was darker than The Twilight Zone, but truthfully, Rod Serling wrote many episodes designed to scare the people of the 1950s. Brooker is no exception. While not every episode always dark and foreboding, much of the show presents a bleak world where man tries  to master over the technology it has created. The best part is Black Mirror does not use AI (artificial intelligence) to bring mankind down the 'rabbit hole'.

The episode called Nosedive (and a personal favourite) features Lacie, an insecure office worker who is trying to boost her social media score to secure a posh apartment in Pelican Bay where they only accept you if you have a 4.5+ score. The entire world uses something designed to look like Facebook, it's eerily mirroring our own world, to share photos and rate other photos to garner favour with other, get the best stuff in life to get a higher score.

You see, in the world if you have a higher score, well then you have access to better housing, better rental cars, better friends. The worst your score is, the harder it is to get quality products or services, and the more people will look down on you. I think this is the most how our world is, when it matters what you have and who you know. Lacie is pushed to the brink trying to get to her friend Naomi's wedding when after a social score plunge meets Susan, a truck driver who had once had a 4.5 score and lost it all after her score failed to save her husband from Cancer. She tells Lacie that is is better to not cater to the system, because then you don't have to keep working to retain that score. In the end, (I won't spoil the ending here, Dear Readers. You to watch for yourself.) sometimes it is better to not worry about what others think, because you are still alive.

The scary part is the China already uses a system much like this. Read here for more China's Social Credit.

This episode features Bryce Dallas Howard (Lady in the Water) is a surprising well acted role, and the story is well developed and not contrived. The writing is really spot on taking the currently technology of the world and taking it to where it will likely be in the next ten minutes or next year. Scary, isn't it?

That is what I love about Black Mirror. the stories are related. You can understand why the character do what they do, even if you don't agree with them. They are real people.

A few of my favourite episodes include 15 Million Merits, The Entire History of You, White Christmas, White Bear, San Junipero, Shut Up and Dance, USS Callister, and Hang the DJ. All of the episodes are quality storytelling, in the vein of The Twilight Zone, but with the modern twist. Also, I must note that the new Doctor, (Doctor Who) Jodie Whittaker is feature in The Entire History of You, Jodie Foster directed Arkangel.

What TV shows and or Movies have you been watching, Dear Reader? What books are you currently reading? I am currently enjoying Netflix's Bill Nye Saves the World, and Garth Nix's The Keys to the Kingdom series. (Lady Friday) Leave me some love below, Dear Readers.


Up next a look at Children's Literature. I am currently submitting two of my children's picture book stories to publishers and part of my research involves reading current children's book that are on the shelves of bookstores everywhere and looking at what what I read as a child (I had quite the collection back in the day).

Posted by Here, There be a Writer at 4:22 PM No comments:

I didn't really know much about this movie, except for the title.

I went in thinking that I was going to be seeing a story and I will react accordingly. When I arrived at the theatre I was surprised that the only other people watching Three Billboards with me were two older ladies who set in the back, while I sat in the front. Their reactions while we watched were worth the ticket price.

Dark comedies. Yeah, I am not used to them, but I was surprised by the storytelling and the acting. This is Sam Rockwell's movie. I won't get spoilery on you, Dear Readers. It's very much a mystery, but not in the normal sense. It's not a hunt for the clues and find the bad guy, but more like a fall into the pieces and happen upon the bad guy. That is kind of refreshing, when most movies put out there are almost too cookie cutter in plot and character development (or having lack of character development).

Sam Rockwell is solid as Jason Dixon, the asshole cop; Woody Harrelson gives a believable performance as Willoughby; and Frances McDormand is really good at being an angry woman. What is amount to are believable characters, who are terribly flawed and that is what is entertaining. Not once during this time did I feel uncomfortable and ready for the movie to be over. It is very engaging, if surprising by what they push the boundaries on.

"They can say that in a movie now?"

I remember thinking halfway through the movie. It's not a fluffy comedy, nor is it a boring drama. Three Billboard gets under your skin, crawls into your brain, and make you think. I like that. I like a story, movie, book, TV show that'll have you think, and even make you a little uncomfortable. 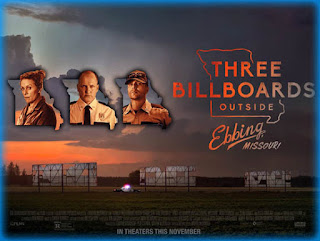 It's a good thought experiment and what would you do in this situation. I have realized lately that if you picture yourself in a characters shoes, sometimes the choices you thought you would make are not what you end up making.

Three Billboards is definitely on my top 10 list for movies in 2017.

What are your thoughts on Three Billboards, Dear Readers? Have you seen it? Will you see it? Leave me a comment below, and next time, my thoughts on the Sci-Fi/Suspense TV show, Black Mirror.