Review With Me: Murder League of the Justice Express

Murder on the Orient Express

I am an avid Agatha Christie fan. I have read about a dozen Hercule Poirot novels. He is my favourite of the Christie characters. There is something about the short little Belgian detective and little grey cells, what he calls his mental processes. He is a quirky little man with a mustache from here to forever who has the ability to solve crimes that seem to be unsolvable to others, like things just so, and tends to butt in where you think he doesn't belong.

Christie, herself, had ridden the Orient Express, and there were two cases where the train had been trapped, which led to Christie's inspiration. Of course the Armstrong case in the story/movie was inspired by Charles Lindbergh's baby being kidnapped and murdered in 1932. The Orient Express definitely proved to be a fertile story to be inspired by.

Kenneth Branagh plays Hercule Poirot, the Belgian detective who  is riding the Orient Express on route to the Armstrong case. He is tired and in desperate need of a vacation, but then murder happens. As time passes, Poirot finds out just how deep the Armstrong case goes and the lies leading to murder.

We are introduced to the other passengers a governess, a doctor, a professor, a princess and her servant, an art dealer, his employee, and his butler, a woman nurse, a salesman, the Contessa and her husband the Count, a widow, the host, the conductor, and finally the detective.

The best part about this movie/novel, is that you don't really know what is going to happen, and at times even Poirot is frustrated with the case and the lack of cooperation of his fellow passengers. So, you as the audience is just as lost as the passengers, but then you start to realize that maybe someone is not all that honest.

This movie is beautifully shot, from down upon the actors, from the outside of the train, looking into the cars, at dinner, in the hallway, giving you the feel of containment and is creepy at times. The train is snowbound on a mountain pass, just before a tunnel, so they are as isolated as you can get, even when the railroad crew arrive to dig the train out. What struck me as cinematographic genius is that at every point you feel just and closed off, secluded, and stuck as the passengers.

As for the acting, well, it is an all star cast, featuring Michelle Pfeiffer, Derek Jacobi, Willem Defoe, Dame Judi Dench, Johnny Depp, Penelope Cruz, and Leslie Odom Jr. Each one brings something to the movie. I was most impressed with Branagh, who while he changed up Poirot character, I felt that brought something different to the character.  Poirot wasn't frail, but he wasn't a master of badassery. Branagh gave Poirot a bit up fisticuffs and liveliness that I think makes him more interesting to a modern audience. I have discuss this with fellow Christie fans, and so far it isn't always in agreement, but when you adapt a movie, sometimes changes happen. Yes, there are those who will not like a Poirot who can chase after the assistant-who is trying to hide evidence of his transgressions-and get into a fist fight with him. But, I also don't see that as a bad thing, it made Poirot more relevant, and the movie more entertaining.

Also, something to consider, the book in question is much drier than the movie, so often director and screenwriters will change thing up to make a movie more engaging.

Favourite characters include Mrs. Hubbard (Pfeiffer), Dr. Arbuthnot (Odom), Hector MacQueen (Gad), , and Miss Mary Debenham (Ridley), all of whom are very convincing as their characters, whether caught is a lie, and refusal to answer Poirot's questions. For an ensemble movie, it is important to be able to have good working chemistry and this cast is stellar in their believable is hiding the truth about their identity (the Contessa), their real names (the Princess and the Widow), or their profession (the professor).

I will say this, I was glad that Johnny Depp was regulated to the role of body. While he is talented, ts movie is about the other characters and the movie is stronger because of it. And as a movie where ALL of the cast (except Poirot) is the murderer, it is important to have a strong cast.

Orient Express is a different mystery, because all of the characters are tied to the death of one man who killed one little girl. Yeah, that's a MAJOR SPOILER, but damn if it isn't ingenious of Christie to write a mystery that involves everyone as a suspect, and actually follow through with their guilt.

I very much recommend this movie for the mystery fan, Agatha Christie fan, or a fan of any of the actors in this movie. 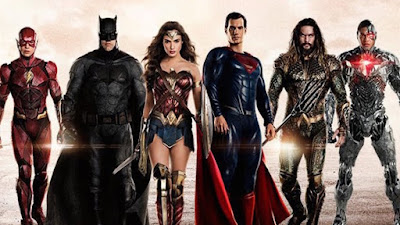 Having little knowledge of the DC Universe I had little prior knowledge to judge the following movie. I am rating Justice League the movie under the comprehension of the story, the acting quality, and the entertainment factor.

First off, I don't generally like Ben Affleck, and I never saw Batman Vs. Superman, so I am just reviewing Affleck as Batman for this movie. Affleck makes Bruce feel real, yes a real douchebag, but real. Someone who is haunted by his past, but also someone who is committed to doing the right thing.

Gal Gadot, as Diane Prince, well I was impressed with the Wonder Woman movie. She gave life to a beloved character and she took no shit in battle or in love. She was definitely a voice of reason in Justice League, but that is what it needed, someone who cares and will tell Bruce Wayne he is making a mistake. She is exotic and brave, but also afraid. That is something the struck me as different i Justice League, every single character (hero) is broken and afraid, yet their find a way to break away from their fears to fight Steppenwolf.

Every single superhero in Justice League (the movie) is broken and flawed, I love that, and that drove the story along and kept me interested in what was going to happen next. There was believably and growth to the character. Diane Prince is my favourite, but Arthur Curry, Aquaman is a close second.

One thing I wish that they had explain more, or at least gave more for the actors to work for the Flash and Aquaman, because they really spent a lot of time of Batman/Bruce Wayne, Wonder Woman/Diana Prince. Cyborg was detailed, but there were times where I think he could have been brought forward more. It didn't bother me that Superman wasn't fully in the movie, the plot didn't need him there until the end.

It is a solid movie, even though I know the critic have been hard on it, and the change in director, the re-shoots, and multiple writers were sometimes obvious. It was bad when I noticed Batman's scruff was in one shot and then not in the next, and then is switch back.

I like the combination of mythologies blended together, from Amazons (Greek) to Atlantians, spaceman (Superman) to mutants (The Flash and Cyborg). It reminds me of other books that combine and re-write mythologies. If you are curious, well, go and read The Chronicles of the Imaginaium Geographica by James A. Owen.

I recommend Justice League to anyone who like a good action movie. To the die hard fans to have rejected, I am sorry it doesn't fit with your universe, but I think it is still a strong. And as I said at the top of this review, maybe it is because I  know less of the DC Universe, but I still stand by everything I said before.

Halloween in School and Beyond

There are a lot of things about Halloween that make it a fun time of year. Most of it stems from Halloween traditions that I took part in in school. so, Dear Readers, let's take a trip down the Halloween lane...

I remember the joys of getting lots of candy that I cold horde over like a mini chocolate dragon. Or watching the spooky movies, of course back then the spookiest thing I watched was Halloween, which isn't that scary or Charlie Brown. But that doesn't mean I don't enjoy watching it every Halloween. There were the school Halloween parties and parade that made school a little less boring and a lot cooler when you could dress as Starlite (from Rainbow Brite) and eat cupcakes and candy all day, and there was no homework, usually.

I grew up in the era of the plastic costume. An idea that someone thought was brilliant and cheap with a plastic suit or dress (depending on the costume) and a plastic mask that was often hard to see through and VERY hot to wear for long periods. I don't have any pictures that survives of the costumes I wore in the time period, but here are a few that I scrounged from the internet.

I do remember wearing the She-Ra one, and I had the Starlite one year, and even needed patching in the arse end due to the fact that if you sat down too roughly, well, you ran the risk of blowing out your arse end.

There was also the free trick or treat bags the were given out by the schools a few days before Halloween. I remember that these bags usually had a few goodies tuck inside of the bag, like coupons for a free small French Fries or ice-cream cone from the local McDonald's, some reflective tape, maybe some stickers. Often the bags come from restaurant chains or local government. 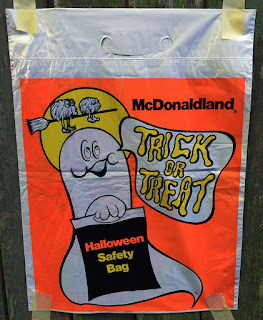 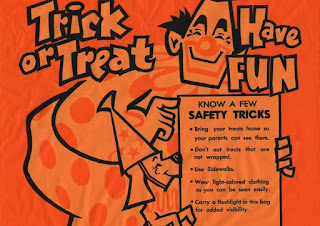 Halloween in school also meant that you had to watch the safety videos, and there were two that circulated throughout the schools. The first one is the one I am most familiar with is this one. The best part is the riff that Horriffic Productions put out a few years ago, and they have become a staple of my yearly Halloween traditions. Those riff can be purchased at Rifftrax. They also riff various horror and spooky movies from Tremors to IT and Children of the Corn, all of which are worthy recipients to the riffing. Check them out!

Favourites
Halloween Special - It's the Great Pumpkin Charlie Brown
Movie: Halloween 1 and 2 (it's like one looooong movie)
Scary Movie: The Haunting the original with Julie Harris.
Food: a good pumpkin muffin or homemade pumpkin pie.
Candy: anything chocolate.
Decoration: a pumpkin and orange lights.

What do you like about Halloween, Dear Readers? Dislike?

I love getting to dress up as someone, or thing else.

I love any excuse to watch spooky scary stuff, even if I jump and get scared.

Tell me about some of your favourite traditions from both school and beyond....

Posted by Here, There be a Writer at 1:30 PM No comments: