Today is Promote a Project Day!! Coins of McGuffin!

What might you ask is a Coins of McGuffin?


It is an animated web series where a brother duo sets off to unite the tribes of fandoms, charged by Exposition (the great glowing head guy) by collecting the lost Coins of McGuffin. I only learned of this exciting series a few months ago, but I am now hooked. David and Jonathan Green are making an awesome animated series about adventure and fandoms. They have 2 episodes already under their belts on their YouTube channel and are working towards an episode 3, 4, and possible web comic. Go check them out here at Coins of McGuffin! You know you want to ~points to you~.

They, along with host Marsha Adair and the McGuffin team, also create highlight episodes of the fandoms that they include in their series. A nice quick introduction to the fandoms.

Right now they need your help. It takes a lot of time and money to make these animated episodes. And up until now they have been funding the episode production themselves. Currently Dave and Jonathan Green need your help to create episode 3. They have a Patreon page and a Kickstarter to help them raise the funds.


The kickstarter has 11 days left as of this blog post. Consider joining the fandom McGuffin bandwagon, or if you cannot make the kickstarter in the next 11 day, then remember the Patreon page. Also, please spread the word, far and wide, to all of the fandoms the joys of the McGuffin. The best part about the kickstarter is perks for joining, everything from trading card (also a cool card game), stickers, choosing the next fandom to get a card or an episode done on it, custom made cards, and of course the love of some super talent geeky people.


Have you ever been into a TV show, comic book series, movie, book series, or cosplaying? It's a fascinating world of joy and discovery and when you meet or introduce more people to the world you get an expanded feeling of joy. I know I do! And I love the joy of joining other fandoms. There's quite a lot out there you know. Coins of McGuffin is a fun look into the fandoms and what we may or may not have in common within each fandom.

These episodes are fun! This series is awesome. More people need to know about the Coins of McGuffin.

And after all, us geeks and nerds need to stick together, right?

See the cards, support the art, play the game.... 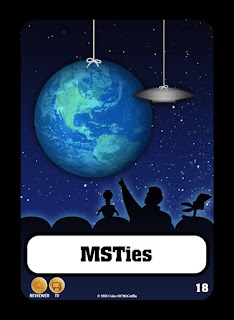 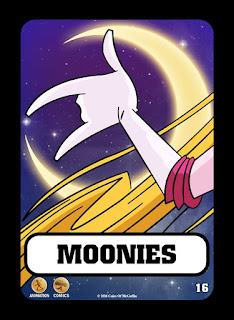 Examples of some of the fandom cards!

They include such fandoms as Whovians, Bronies, Dragon Ball Z, Ringers, Mouseketeers, Sherlockians, Citizens of the Four Nations, Browncoats, and so on...


From David Scott, internet collaborator and fan of the Coins of McGuffin and who has  worked on the Muppet Wish Day videos (see Isle of Rangoon, another awesome web series to check out) with David Green, who plays himself and DJ Soundbite. (see twitter links)

"I want the show to get at least three animated episodes as a set up for the card set, which has
the potential to be fun as a game, or enjoyable for those who like simply collecting the cards and
learning about each of the different fandoms. David has been fun to collaborate with on the Isle of
Rangoon "Muppet Wish Day" videos, and I wish him a bright future with this project."
Posted by Here, There be a Writer at 7:27 PM No comments:

I have seen more movies this year, and its odd, but am glad I am making an effort to watch more movies. There are a number of really good movies that have come out recently. Still, I can be very selective of what I watch. I will admit that I am a bit behind on my Disney movies, still haven't watched Tarzan or Princess and the Frog.

Anyway, Dear Readers, I went to see Zootopia this past weekend. 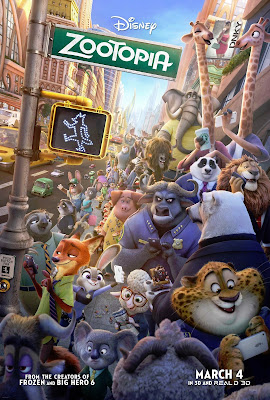 First thing, don't go see a seven o'clock showing if you don't like a theatre filled with kids. 'Twas a bit noisy, but I digress.Yet I think the adult laughed harder at the humour in the movie.

Second, Disney can actually tell a story, one with purpose and relevance. This is something that I think gets lost in some of the movies (Disney and non-Disney alike) now-a-days.

Okay, with that aside, Zootopia wasn't what I was expecting. I really wasn't sure what to expect actually. The movie opens on a school pageant showcasing the history of Zootopia with Judy Hops, future Bunny Cop. Not something that creatures of this world expect (insert prejudices about bunnies and foxes here). Bunnies are carrot farmers, usually, but Judy plans to defy all the conventions and becomes a police officer. After becoming valedictorian of her class at Zootopia's police academy, she is placed in city center as a meter maid. Not one to give up she make her ticket quota and weasels her way onto a missing mammal case (looking for Emmett Otterton, the irony of this was NOT lost on me). She enlists the aid of a fox, Nick Wilde and adventure abounds in the search for the missing mammals.

What I was expecting was nothing like the richly developed world that Disney created. Its a real world, with subtleties of real problems that animals face and with its various cultures and personalities, and even prejudices portrayed. Yes, Zootopia has prejudices!

It was everything I could hope for in a KIDS MOVIE; a story for the children and a story for the adult, that even includes lessons that can be taught and learned in our own world. Learning to look past what we see in other people, bunnies, foxes, and sheep. Learning to come together to make the world a better place. Seeing a world with issues and meaty concepts that rise up, and rise up they did, with characters that could actually make that world a better place. It gave me something to consider when I think of my own world, my own views of the people that live on planet earth.

Not to get too deep, but really it was surprising and delightful to see that people really do care about the world. Enough so that they will make a statement to educate children that it is okay to be different. Kudos! 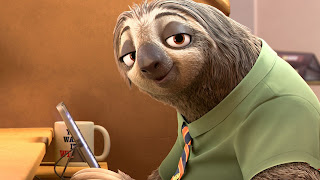 I also like to point out the eclectic casting from Idris Elba, Jason Bateman, Alan Tudyk, Octavia Spencer, and Shakira to name a few. If you get a chance to watch this movie then you should.
Posted by Here, There be a Writer at 6:30 PM No comments:

2016 is the year that brought back the Full House cast in a new show Fuller House. 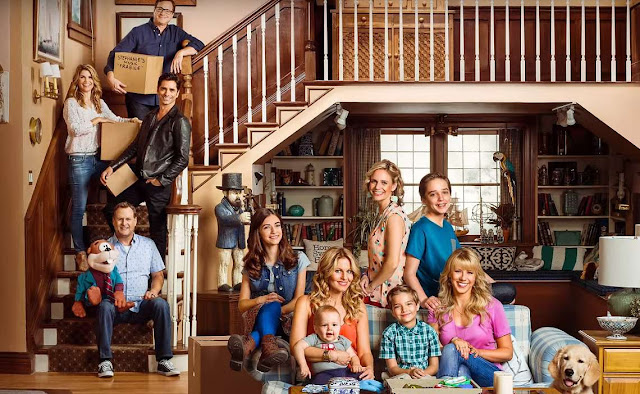 Since acquiring Netflix I have noticed that they have been creating a whole slew of their own TV shows. Up to now I haven't jumped on that bandwagon, well until last weekend anyway.

See, I hear a lot, A LOT, about House of Cards and Black in the New Orange, but I haven't jumped into these shows. Maybe because I have too many shows in my queue,or  it's not what I am into, maybe it never occurred to me to try it out. These are all excuses I have used, but then Netflix had to bring most of thecast of Full House, expect the Olsen Twins, into a new show focusing on DJ, Kimmy, and Stephanie (now young women) raising three boys and a teenage girl (see the parallels coming now).

I really didn't know much about the show prior to watching it. I also didn't know if i could sit through it, after all I loved the original. How could the sequel show be any good? Sometimes when to go to revisit something from your youth it doesn't taste quite the same as what you remembered. I watched the first episode with some trepidation, only to be pleasantly surprised. There was a number of throwbacks from all of the classic one liners, from "How Rude" to "Have Mercy", and the obvious "Cut it Out". Believe it or not they are used infrequently and not to the detriment of the show. It would have been an easy thing to do to over use them. The characters of DJ, Kimmy, and Stephanie are well portrayed and it seems that the actress didn't lose stride with returning to their character, and yet adding more depth to their grown up characters.

I will admit that the cameos sometimes felt forced, having Uncle Jesse forget his lucky guitar, Priscilla, or having Becky stick around to see to who got the flowers in the secret admirer episode. I hope they get a chance to ring Danny, Jesse, Joey, and Becky back for more episodes and not just one at a time, although the season finale was a nice touch having Jesse, Joey, and Becky. Overall, though it was fun to see the cast reunite and have some fun with the new stories.

It is a major cheese fest, but I enjoyed the original series which was just as cheesy with Danny's incessant cleaning that has been passed down to DJ and her son, Max.

If you want a fun watch, you should check it out, everything from Stephanie/Kimmy kiss to She Wolf  Pack to Jesse ans Stephanie exchanging lines. And there is ABSOLUTELY nothing wrong with hugging it out. 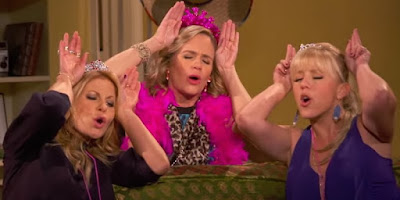 It is interesting to know that after this season, both of the Tanner girls will have appeared on Dancing with the Stars. Jodie Sweetin is set to dance for the 22nd season of the show. And Candace was on Season 18.

What is your favourite part of Full House, Dear Readers? Have you watched Fuller House yet? Will you? What are your thoughts on the show?
Posted by Here, There be a Writer at 5:18 PM No comments: