I have a name for my review month. October is Book to Movie Reviews! It's a little late, but October has begun.

Since I started reviewing movies that were based on children’s stories, I have found that many of these movies are clearly not as good as the book. Often this is a give. Looking deeper some were terrible, that would be Wrinkle in Time (a mini-series) or The Seeker (movie); while other were actually pretty good as stand alone movies. Last year, out of my four October young adult fiction reviews, or Eragon and The Seeker (The Dark is Rising) reviews, I only found one that was better than the source material. Yeah, only one! Surprised? Not me. I am picky about the stories that I hold dear

Today, we travel once again to the nostalgia of books and movies from childhood. Movies that I watched as a kid; and books I read and re-read as an adult. In some cases it was the other way around. Which ever way you look at it, if you read, watch movies, or both, then you probably have compared movies to books. It’s hard not to, especially when you love a story so much. This week’s story is no different, and I find that I am hard to pick a side in this battle. The Last Unicorn is a story that is so lovingly written by the author. How can it be bad in movie form?

I first watched this movie on television when I was home from school, sick. Back then I was awestruck with the Unicorn. I remember wanting to be the Unicorn, then again what little girl doesn't? Okay, so the story is about a unicorn , the last and she’s looking for the others. It features magic. I was in love. My seven year old mind didn’t know about Peter S. Beagle’s novel yet. I was only aware that this movie was awesome. The unicorn was the focal point. I was rooting for her, feeling sad when she was changed into a human, and super excited to see all unicorns race from the sea into the world. There was also the title track, sung by , which was formed in by three American army lads on an American army base. When the lead singer would sing “I’m Alive….I’m ALIIIIIVE!” I got chills! Man, I still get chills. There is so much I could say about the movie, but that is not the only reason we are here.

There was a book first! 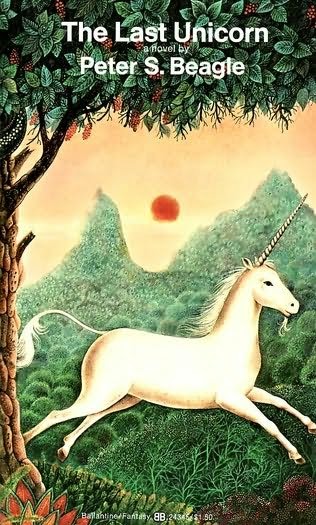 This book, once I grew up a bit and discovered the joys of reading, I read a lot. There was a greater magic that came with books. It’s a natural feeling that I discovered. I found this book at a used bookstore and remembering the movie. Curiosity happened and I read it. I was floored. It wasn’t because the book’s dialogue mirrored the movies (in most respects that is), but the screenplay was also written by the author, Peter S. Beagle. It is a rich and beautiful story. The characters based on common fantasy tropes, the Hero(s), Heroine, the Comedic Relief, the Voice of Reason, and the Villain(s). On my second reading, the characters were aware of the outside world, talking of stories greater than themselves.

Let us begin. Which is better?

The book, as usual has much more. There are greater back stories on some of the characters such as Schmendrick, Haggard, Lir, and even Brave Captain Cully. But in the movie some of these character’s tones changed or shifted. If you never read the book you wouldn’t know that Schmendrick was granted immortality in order to learn magic by his mentor. It’s not even by his choice. He cannot die until he gains TRUE magic; the magic that rules the universe. In both versions we are introduced to an inept magician. A bumbling trickster who entertains the guest of Mommy Fortuna’s Midnight Carnival who can barely do the tricks asked of him. In the book you are told throughout the story that prior in the story Schmendrick is made to live forever by his teacher/mentor, Nikos. It is his quest and part of that drive the Unicorn’s quest. In the effort to save the Unicorn, Schmendrick saves the Unicorn, twice, with TRUE magic. He comes of as more of an asshole in the story than the movie, but with a purpose. You know he is an asshole, while in the movie you just think he’s a none too bright magician, while the movie portrays him as just a bumbling magician.

Then there is the Unicorn herself. There are many legends and stories of unicorns, from all across history, but here is the core of the legends. Beagle uses these to enhance the Unicorn’s character, but not all of them are transferable into the movie, which sometimes leaves the unicorn looking cold-hearted. Unicorn, as far as the book goes are vain, solitary, and highly magical. They also do not know what human emotions are. They interact with their world with a vague indifference, but also as a Caretaker or a King might do, watching over their forest (realms). Think of a king, he rules over villages, lords, ladies, and peasants. He cannot have too much emotion, as he would be awfully bias in rulings. So it is with the Unicorn, being immortal there is no call for emotions. Another point is that unicorns are attracted to pure females or males. Men, it seems are not be able to lay hands upon unicorns. The book talks about how Molly Grue can touch the Unicorn, but Schmendrick cannot, nor can Lir. It’s a little thing, but during the courtship of Lir and Amalthea it’s crucial to know that Lir is not able to touch her, this whole time he hasn't even touch his beloved.

I know what you’re thinking, but Cindy, it’s a kids movie. It certainly doesn't need all this subtle subtext and back story. Yes, you are right. But, when I set them side by side, I saw that made the movie version weaker without having something of these points includes. Maybe I am too literate as of late, but it seems to me that Schmendrick and the Unicorn could have done with the inclusion of these elements.

Another point was the rushing of the story. You do not get an idea of how long the Unicorn has traveled to get to Mommy Fortuna, Captain Cully, and Haggard’s realm. Heck, it’s a good year that the Unicorn, Molly Grue, and Schmendrick spend at Haggard’s castle looking for the unicorns. Did you know that? You do get background scene changes as she is traveling during the Man’s Road number, but it’s not the same. The hard hitting fact is the Unicorn is away from her forest, my realm for at least two, if not three years. One of those years is as a human in Haggard’s kingdom. The movie pushes the story on, and shoves you into two montages to get the point across. It feels weak.
This is not to say that the movie isn't good. The artwork is done by the anime studio Topcraft, the same studio that brought you Doctor Snuggles, The Adventures of the Little Koala, and Nausicaa of the Valley of the Wind. Topcraft became Studio Ghibli. My point is that this movie is fantastic. There is also the music, written and composed by Jimmy Webb, and three of the songs were performed by (The Last Unicorn, Man’s Road, In the Sea). Who doesn't love the song The Last Unicorn? Right?

As a children’s movie, The Last Unicorn is vastly different from other children’s movies and has a strong story, and much of the original novel is included. The scenes that were taken out do not necessarily make the story any weaker. I mean, you don’t know about the witch’s curse on Haggard’s castle or Hagsgate in the movie, but it isn't important to that story. What is, is the Unicorn is looking for her kin, taken by the Red Bull for King Haggard. The Red Bull whom is in Haggard’s keeping, and the Unicorn must stand up to the Red Bull to release the unicorns. The , while a crucial part of the novel’s story is not the focus of the movie. It is expendable. I would have preferred to include it, but the movie’s story doesn't need it, while the book does. You also don’t get the subtly of captain Cully’s and his men in . They are the antithesis of Robin Hood’s men--they are free men who have to pay for the right to be free, but again it is not needed.

I do feel that what the movie suffers from is Mia Farrow singing, her song Now That I’m a Woman is truly horrendous, although I think the duet version with Prince Lir’s, That’s All I Have to Say is a bit better having another’s vocal: confirmed via IMDB.com, Katie Irving is the vocal in the duet. Also, the rushed pace of the movie I think hurts the flow. Either than that, the point of the story is not just about the Unicorn’s search for the other unicorns, but the journey that is undertaken.

In the end, I have enjoyed both versions and probably enjoy both until the books are written by rabbits (Schmendrick’s words). Beagle’s story is inspiring and touching. An often watched and quoted movie, I think it is safe to say that Last Unicorn will last forever. It is interesting to note that at one time a live action version was in the works. It has been stalled since 1999; see Peter S. Beagle’s tumblr for details. Also there’s a rumours of a The Last Unicorn musical, again I found nothing to indicate it has progress further than talk of it.

But…either would be epically awesome, if done right.

Note: The graphic novel of The Last Unicorn is pretty stellar and keeps to the original source material. A must read for the die hard fan.
Posted by Here, There be a Writer at 5:16 PM