"The Day of the Doctor" Review ~Spoilers, Darling~ 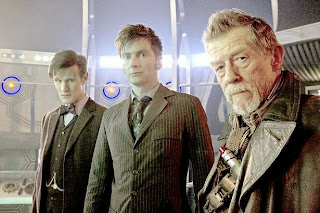 I never thought that there would be a moment where Moffat seemed to get it right, but the 50th anniversary is simply stunning, gorgeous, and awesome all rolled into one. I think that the reason is because I didn’t have any expectations of what the 50th should be. I just watched it and enjoyed it, from acting to story. Everything about the episode is full of AWESOME.

What we got was a strong story about the last day of the Time War and a nice dialogue with the Doctor and “The Moment (Galaxy Eater).” 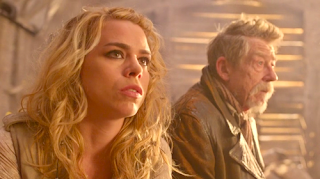 I find it fascinating that the 50th anniversary episode has brought Whovians from all walks of life, together. It really is a celebration of all things Whovian. I also think that everyone involved in the 50thseemed to have a lot of fun making it.

I could good through each and every point in the special and dissect it, but I want to talk about my favourite points of the episode. Maybe even talk about the things that raised a few eyebrows. Every Whovian with whom I have talked is-in general-in agreement that the episode stand well on its own; from example, I have two friends who went to go see it in 3-D at the movie theatre the following Monday. They had seen very few episodes of the New Who or only episodes of the Doctor they grew up with (that be you Mr. Baker). Yet, when they talked about it, it was only with a sincere joy and pleasure. Mel and Dee really enjoyed watching it. How many TV series can say that, that folks who have only seen a few epsiodes can still enjoy watch the big 50th? It means there was stellar writing to back up the story and lots of care too. Yes, there are nay-sayers and pessimists, but on whole some most seemed to honestly enjoy it.

First, I give Steve Moffat credit for finally making Clara into a character, a real character. So many times I wanted to like Clara, but was left feeling that she wasn’t a part of the Doctor and his life. Her part-time status always felt like it weakened her as a character, even when she did the most impossible things, "The Name of the Doctor" or "The Rings of Akatan". This time, I felt that she is worthy of the title the Doctor’s Companion; to have her question the choice of the Doctor’s decision on the fate of Gallifrey? It was brilliant! It worked. It feels like Clara was the next generation of Companion. I can only hope that continues into Peter Capaldi's time as the Doctor. As touching as it was to have 10, 11, and the War Doctor to share the burden of that choice; there was something equally fantastic about Clara asking if there was another way.

Second, the choice of Billie Piper in the form of Bad Wolf as “The Moment”, the sentient Galaxy Eater was rather confusing. It left me wishing there was a Rose sub-plot, as I never really got over the Rose in an alternate dimension world story arc. I was a bit frustrated, not at Billie Piper, but that hole in my heart after "Doomsday" wanted it to be Rose Tyler. But after watching the 50th a second time that I realized that the choice to use Rose as the interface of "The Moment" was the better choice.  By having Bad Wolf there (even only in form alone) made John Hurt’s War Doctor that much stronger. Billie Piper did an excellent job as “The Moment”, fun and mischievous, yet sad at it's role in the story of the Time War.

There were many a moments of SQUEEING and fan girlness, which included Peter Capaldi's eyes in the battle to save Gallifrey, the introduction of the Curator Doctor,Tom Baker, and (my personal favourite) the machine that goes DING!

I loved seeing how Tennant, Smith, and Hurt worked off each other. There was this energy that linked them all together, whether they were mocking each other or working together. "This is what I am like by myself," Matt Smith Doctor. Or seeing the man behind the stories of Jim Henson's "The Storyteller" in the garb of the (War) Doctor It was touching when it needed to be and dark  when it need to be. He is every much the Doctor as is Smith, Tennant, Baker, or Hartnell, even though it's a grittier Doctor. He is the War Doctor after all. I couldn't have picked a better Doctor (well except maybe Hugh Laurie. Hey, a girl can dream, right?). You should check out "The Storyteller" and "Greek Myths: Storyteller" DVDs.

The biggest enigma and what EVERYONE seems to want to talk about is what number in Matt Smith's Doctor and what it means for Capaldi's Doctor. Is Matt Smith 11 or 12? Do you count Tennant's mini regeneration at the end of season 3? Can there be more than 13 lives of a Time Lord? What can we see in season 8?

Some things are pretty obvious, to me at least. The search for Gallifrey? I think so. It's sounds like the next great adventure. I bloody well excited!

Now I have 24 more days before new Doctor Who, the regeneration of Matt Smith, and all of that good stuff!! I might have to watch the 8th Doctor's movie and review it....Stay tuned, Dear Readers!!
Posted by Here, There be a Writer at 10:32 AM