I got the party hats, the holiday crackers, and the cheese and pepperoni trays.

I can't believe it's the end of 2013. It feels like 2013 has only barely begun I know it's just another day, but there is something about seeing the New Year birthed (into a fire of drunken bodies and confetti). Okay, that's a bad image, but seriously, it's a new yea, something to celebrate. It's a fresh start for everyone; whether you have had the longest year ever, or just are ready for a change in numerals.

I had a pretty good year overall. There were thing I could've done without (car repairs, money being tight, or the passing of my furr-baby); so, I am looking forward to a year of new challenges and opportunities, everything from getting my writing of the ground to meeting new writer friends and colleagues. Looking to take trips to places I haven't been to or at least hardly ever get to. Catching up on reading books (that's probably won;t ever happen) and watching television shows (via Netflix and DVD). Spending more time with friends. Enjoying the State of New York. Maybe even get a new car (that might be wishful thinking there).

I certainly hope that some of my friends have a bit better luck in 2014. There were struggles, speed bumps, and the like all around me (both things in my life and my friends). I hope to help alleviate some of the struggles, not that I can fix everything, but gonna help where I can.

I am going to heal myself of some of the hurt that 2013 has given me, build stronger foundations, and enjoy life completely. It's a fresh start, filled with possibilities, and that makes me feel pretty good (even though it's winter and this is NEW YORK STATE and freezing outside. I live in central New York, and it's freakin' cold here.).

Happy New Year, Dear Readers! I hope you have a wonderful New Year's Eve and a awesome start to 2014. I will be starting my poetry month with a villanelle about sandals tomorrow (1/01) and on January 6th, "A Round of Words in 80 Days". 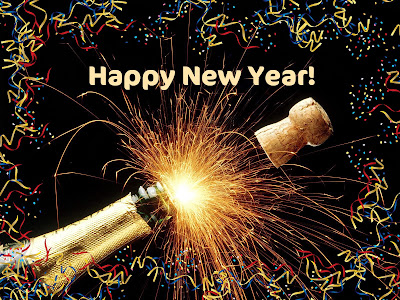