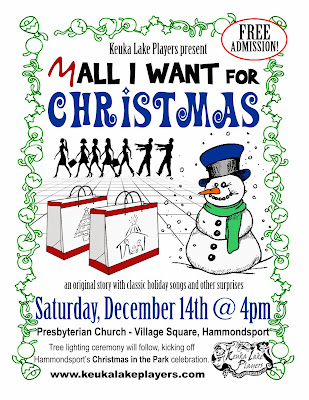 Here's a question for you, Dear Readers.

Can you imagine putting together a show in 2 weeks? Start to finish, from brainstorming to writing, rehearsing to performing.

It's kind of difficult to imagine, right (well, if you are familiar with theatre, maybe not as much)? Not really for me though. I have done 24 Hour Theatre (theatre created in 24 hours) and the Keuka Lake Players Christmas Show. In both cases you need fortitude and a bit of faith.

For me, the challenge to put a show together in two weeks time has become second nature. We meet and brainstorm an idea and build a show around a story and/or concept using Christmas Carols, Broadway Show Tunes, and pretty much any music that would fit into a situation. This year started a bit different. It started with Patty's idea and with the help of Sara, David, and myself a script was born in a week's time. A pretty darn AWESOME script too: about a Mall on Christmas Eve. I got to write two vignettes and some dialogue for other characters with the help of Patty (the director) and Sara (Producer), and David (fellow writer). After a week or so, my dialogue bits and David's narration and transition bits, plus Sara's tweaking and Patty's concept we had a script.

Now, in the second week we have been rehearsing the show; rehearsing the music, and making the show our own. Most actors will tell you that when they play a character they make the character their own, with help from the director. I have been through this many a time as an actor, but also I have helped others find their characters (as a director). It's a gratifying experience to say the least. The pitfall of this kind of show is that it only get performed once. But, on the other hand, you get the chance to be part of something wonderful that was created together. And for the village of Hammondsport, for the Christmas in the Park has become tradition since 2007.

I did not join in this festive tradition 2009, but I have been involved in it since. I get to work with my extended Keuka family (I have several theatre families: Lake Country Players, Keuka Lake Players, Centre Stage Community Theatre, and Elmira Little Theatre). Some of the past shows include "The Tailor of Gloucester", "Christmas on the Prairie", "Christmas Day in the Morning."

This year I really got to flex my writing muscles. See, since 2011 I have made writing an core part of my life. I write and blog about almost everything (So far. Give me time, Dear Readers, I will get to everything in due time).  I compose poetry and write plays or I pen novels and short stories. The chance to really stretch my writing was too good to pass up this year. The best part is knowing many of the people I am writing for and working with. That kind of gives me a boost with what could write about. It also fun to welcome new faces and talents to the mix. This year's show, titled "Mall I want for Christmas" I hope will be as good for the audience as it has been for us the actors and director. It has all the feeling and heart that is normally put into a show and more because it done in two weeks. I think that speaks volumes. This show (and past shows) is one of love and good cheer!

I will say one more thing about the Christmas show. It is a very organic experience. One that changes and evolves as it grows; and that is part of what draws me to it, as an experience. You have to be open and willing to work outside what sometimes you take for granted. I love doing theatre because every show teaches me. The KLP Christmas Show is no different.

If you are in the area of Hammondsport, NY on Saturday, December 14th at 4pm, come on down to the Presbyterian Church for a free show of "Mall i want for Christmas" written, directed, and performed by the Keuka Lake Players.
Posted by Here, There be a Writer at 8:48 PM