One bear in a blue coat! How odd? 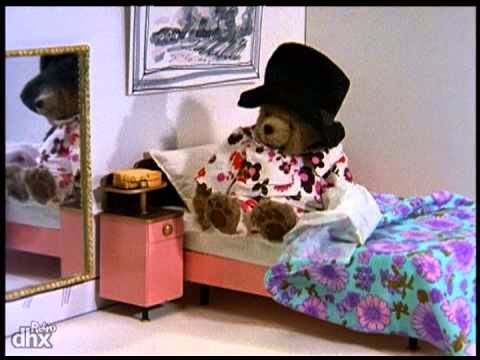 I am excited for the impending Paddington movie, not just because Peter Capaldi is in it (okay, I'm a Whovian), but I have a recollection of the cartoon. Okay, only slightly vague, but I do remember this funny little bear in a blue coat and floppy black hat. Somewhere is my head I remember seeing them on my local PBS station as filler segments between shows. Also Paddington aired on various other stations as filler from Nickeleon, USA, Disney, and HBO. Not bad for a bear from Darkest Peru, eh? He's a well traveled bear!

Also, my local library (the Darwin R. Barker Library) had a stuffed Paddington on top of one of the shelves. Michael Bond is the author and creator of Paddington and wrote over 20 books featuring the little bear starting in 1958 up to present day 2014 with the most recent book Love from Paddington. The bear was inspired by a toy bear that Michael bought for his wife. She was the one to name the little bear Paddington, after all they lived near Paddington Station.

Today we (the hubs and I) procured a DVD of the 1975 Paddington series and after watching about 5 episodes (there are 56 in total , include 3 specials) and I have a few thoughts. First, in style, Paddington is different than many other shows from my youth and even what's out there today. It's not all about puppets (it's actually stop motion animation), nor all animation. It falls somewhere in the middle. You have a three dimensional bear in a two dimensional world, where the Browns Henry, Mary, Judy, and Johnathan of 32 Winsor Gardens and as all of the rest of the people are basically animated paper dolls. This style is not something that I really remember seeing done before, it does not hinder the 5 minute episodes. There is a bit of charm about it.

Second, the plots are relatively simple. There's not a lot to them and it's that simplicity that is probably what makes the books awesome. In fact it the 1975 cartoon feels like the story is a continuing adventures of Paddington (series 1 is episodes 1 -30 and series 2 is episodes 31 - 56). You have a bear from the Darkest Peru trying to acclimate to life in England; he doesn't know how to ride escalators or shop for pyjamas, but its awfully cute in the trouble he gets into. Thankfully the kind-hearted Browns have decided that the little bear in the blue coat at the train station needed to come home with them. I mean really? Does no one think that a beat walking around a train station wearing a blue coat and black hat is strange. I mean, would you just take a bear home that you only just met at the train station? Okay, I probably would, but I would also take home an elephant named Babar. So what do I know?

Third,  this is prep work for going to watch the live action movie, which actually looks pretty good. I don't normally get excited about movies. I did get excited for Kingdom of the Crystal Skull. Hey, I never got to see Last Crusade. Anyway, this looks like it could be good. I am leery of remake/modern adaptations, sometimes  well intended movie makers will muck up a perfectly story. I am going in with an open, but excited mind.

So, Dear Readers, are you familiar with Paddington? Books or Cartoon? What other children's books did you grow up on? I had a lot of books as a kid, the Frances: Bread and Jam for Frances and Best Friends for Frances, the Babar books, Roland the Minstrel Pig, and lots of Dr. Seuss.

Note: there were two different animated Paddington cartoons, one in 1989 made by Hanna-Barbera and starred Tim Curry as cranky Mr. Curry, called Paddington Bear. There were only 13 episode made. And then later a French-Canadian series called The Adventures of Paddington Bear that ran from 1997 - 2001 with a whopping 117 episodes.


There are some episodes on youtube, but if you are a fan or just want to have the whole set then get this DVD set, which has all of the original series and the first 13 episode (39 segments) of the 1997 animated series.

Now go have a marmalade sandwich!
Posted by Here, There be a Writer at 8:13 PM