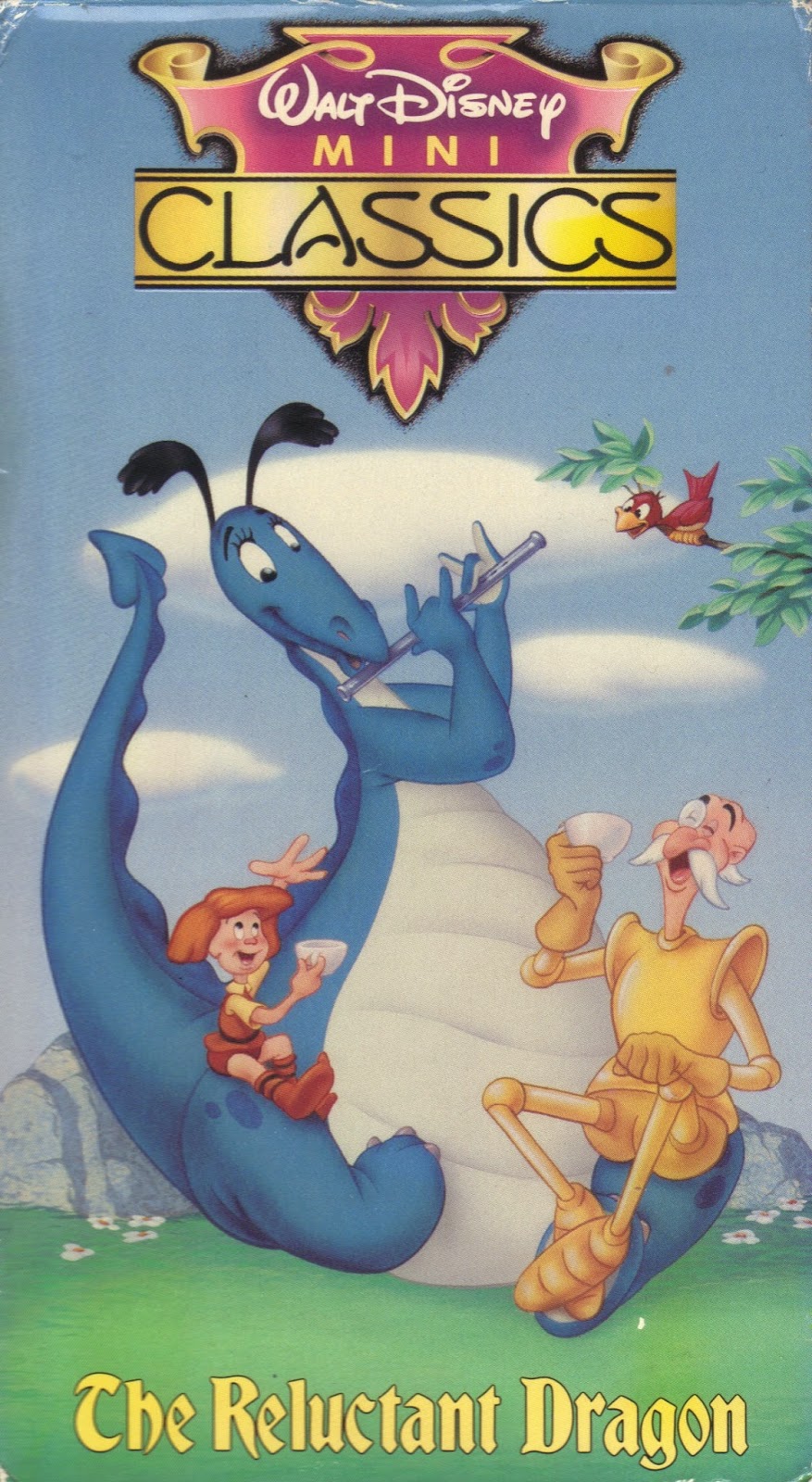 Continuing with my viewing of the Disney Mini-Classics, I am featuring, "The Reluctant Dragon". A cute 18 minute short about a dragon that prefers poetry and picnics to fighting. I am a little less familiar with this one, than say, "Mickey and the Beanstalk", "The Prince and the Pauper", "Donald in Mathmagic Land", or "The Legend of Sleepy Hollow". (I am planning on doing subsequent blogs on some of these others.)

"The Reluctant Dragon" is one that cute and quirky all rolled into one. Loosely based on the earlier story of St. George and the Dragon, and directly adapted from the book written by Kenneth Grahame in 1898, the story tells of a dragon that is seen in the nearby country-side and thought to be terrorizing the villagers. A young boy, whose was warned by his father (a Shepard) and well versed in the lore of knights and dragon goes to investigate. He finds a dragon who loves poetry, playing his flute with birds, and drinking tea. In his aim to save the peace loving (reluctant) dragon the boy runs to town only to finds that a Sir Giles is going to fight and kill the dragon. 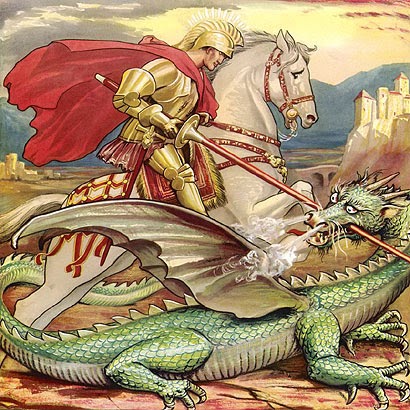 The story of St. George and the Dragon goes like this; a dragon is menacing a village in Libya, the villagers are giving it sheep as appeasement and later children. When the rulers daughter is next to be sacrificed, along comes St. George. He battles a Dragon and rescues the daughter after the town of 'Silene' agrees to convert to Christianity. More on St. George here: Royal Society of St. George.

Back to the cartoon; he, the boy tries to warn the dragon and then persuades Sir Giles to come see the dragon for myself. Where upon the dragon and Sir Giles recite poetry to each other over a picnic. This has to be a favourite part and most likely a memorable part: Ode to a Little Upside Down Cake. After discussion Giles and the Dragon decide to stage a mock battle, even after the dragon realizes the he now has to fight. He is stricken with stage fright and can only be provoke to create flame after the boy calls him a "Punk Poet". The resulting battle ends in a dramatic "death" of the dragon and the following conclusion with Giles bringing the dragon to town and "reforming" him from "never rampaging throughout the country side again".  Note: you cannot find the Reluctant Dragon on youtube, except in one of my local Salvation Army stores. You can also find VHS copies of all the Disney Mini Classics cheaply on eBay or if you are diligent going to Salvo Stores, Flea Markets, or Yard Sales.

Streaming Netflix has "The Reluctant Dragon" as a full movie. Produced in 1941 by the Disney Studios, it features a tour of the studios, a couple of animated shorts, and ending with the the movie of "The Reluctant Dragon". It's an interesting watch seeing bits of the studio, seeing the magic of the animated movies; cartoon drawing, the voice actors (Donald Duck and Clara Cluck), sound effects, camera work (with Donald Duck), colour and painting (with Bambi), story boarding, and the like. I'd say check it out if you get a chance.

As a dragon lover, I find "The Reluctant Dragon" charming, partly because of the dragon , but also because he loves poetry and is not the standard fire breathing monster from fairy tales. It's very silly thing, but a delightful and classic thing. Dragons are actually fond of tea, doncha know?

The bonus on the VHS tape in the short "Morris the Midget Moose", which I have never seen before, but is a cute story about a rather small moose (Morris) with large antlers and a regular sized moose with small antlers (Balsam) and how they teamed up to challenge the reigning moose leader. A good story about teamwork and friendship.

Dear Readers, I have rather enjoyed many of these Disney shorts and cartoons from this time period (the 1940-50's era). They are rather fun stories, told in a simple way. Taking different stories from books and legends, or even creating new stories to be told in a new way, and since Technicolor was becoming a BIG thing, it expanded the scope of storytelling through moving pictures. If you haven't seen any of these, you should check them out and if you have, then re-watch them (Donald in Mathmagic Land, Mickey and the Beanstalk, and Lambert the Sheepish Lion. They are still good as they were when you were a kid, Dear Readers.
Posted by Here, There be a Writer at 3:44 PM