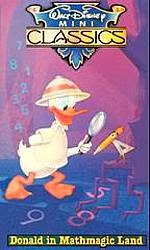 Anyone growing between the 1960's and at LEAST the 1980's most likely saw "Donald Duck in Mathmagic Land". I remember going one of the FIRST video rental places in Fredonia in the 1980's, outside of the Barker Library, "Video Unlimited". Made in June of 1959 and was featured with the movie release of "Darby O' Gill and the Little People" and nominated for an Academy Award: Best Documentary - Short Subjects. It features the voices of Clarence Nash as Donald and Paul Frees as The Spirit of Adventure (known as Boris Badenov on The Rocky and Bullwinkle Show). It was pretty popular viewing in schools (I wonder why?).

I remember watching this A LOT as a kid. I was maybe a bit obsessed with the older Disney cartoon and shorts: The Reluctant Dragon, Lambert the Sheepish Lion, The Prince and the Pauper, and Mickey and the Beanstalk to mention a few. I think I was fascinated by the golden segment and the golden rectangle being featured in art and nature. As a fan of all things ancient Greek, I was wowed.

Geometry was one division of math that I understood, somewhat. And after my reviewing of this special, I was able to understand what the Greeks meant by the Golden Segment (Ratio). A length of a segment that made up the most perfect shape (in their minds), the Gold rectangle. Which was used by the ancient Greeks in art and architecture. Then later in modern paintings. It's kinda neat to see how simple shape are broken down into the structures of our world; in the spirals of shells and pine cones, the pentagon of flowers and starfish; and the pentagrams that features the Golden Segment (Ratio) and the Golden Rectangle. ]

I am no math person and to try to put into words things mathematical, I get lost, but these pictures show what I mean to say. 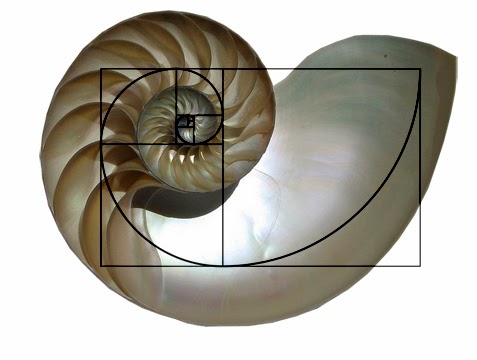 And also in nature! It makes me appreciate the beauty of the world and the beauty if math. I still rather dislike trigonometry, but that is me. Math is beautiful!

Dear Readers, "Donald Duck in Mathmagic Land" is a nice introduction to higher math concepts for both kids and adults. Thankfully you can find in on VHS (at Salvation Army stores and Flea Markets and also on youtube. It's a fun little trip down memory lane. Even with Donald pointing out the square roots of the trees in "Mathmagic Land". And the art is pretty cool too! I do love a good fantasy realm, even if it contains: number falls, square roots, and pi creatures. 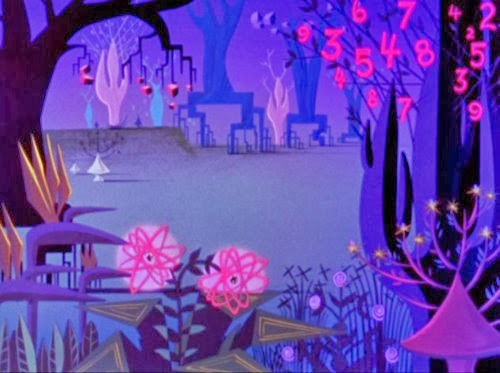 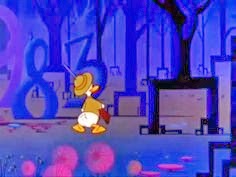