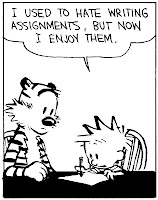 I survived my 7 day blog challenge! It was certainly a challenge and a learning experience. I'm not sure I would blog everyday. It's kind of hard to come up with something to write about everyday, at least something that other people would want to read about. Maybe if that was my job I could possibly blog everyday, but not with my current job and projects.  It didn't help that I am also running all month long sonnet writing project at the same time. There were a number of thing s that I learned from this past week:
1. Always have a list off ideas that you can pull from. Even with you are unsure of what to write, having a general list of concepts, ideas, and half developed thoughts will help you to reign in your potential ideas for use in your blog.
2. It doesn't hurt to have 2 or more blogs started at the same time. As over zealous as this sounds, it is helpful to has a couple ideas gestating while to write your blog.
3. Know your limit. Don't be afraid to step back and go simpler in style or topic. If you generally don't have a topic, but you still want to put out a product, then free form write, or even write something that is easy for you fiction/prose/poetry (poetry works for me).
4. After to reach your goal, feel free to take a break. After 7 days straight of writing everything and anything, it was nice to sit back and say, "You know what brain? We are not gonna write tonight, instead wear are gonna watch 'Mythbusters' or 'Torchwood'." I took 2 days off from writing, excluding the sonnets, and feel renew, refreshed, and ready to work on a few blog projects that I have in the works.

5. Don't give up! This is the most important. I wanted to give up at the 3rd or 4th day. I didn't! I push forward and found something to write about. 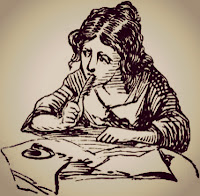 Side note: Also, I know I said I wouldn't do the 7 day challenge again. I don't think that was entirely true. I had a great time testing my brain with new topics and getting creative. It's definitely something you have to exercise. The will to write everyday. I will probably try it again, but for now I will stick to one, or twice a week. 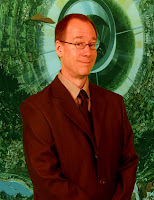 So, it's (was) Joel Hodgson's Birthday (2/20)!! The man who created Mystery Science Theatre 3000 (MST3K) turned 53 today/yesterday!  A magician, comedian, tinker, and all around funny guy is Mr. Hodgson. Did you know that he started his career as an amateur  magician when he was in high school, even won "Junior Magician Award" twice. In college he got into stand up comedy, and then made to jump to California in 1982 to break into comedy. Then in 1978 he returned back to St.Paul, Minnesota  to create the best sci-fi show ever (okay, in my opinion anyway); it began airing KTMA in 1988 and then Comedy Central's precursor "The Comedy Channel" in 1989. For more information on Joel, the Bots, and MST3K go the MST3K Goldmine!

I am very familiar with MST3K. During college, my then boyfriend (now husband) introduced me to the wonders of this show. The terrible movies that were dredged up from the deepest abysses and the incessantly irresistible robots 'Crow' ‘Tom Servo' and 'Gypsy,' and their creator, Joel Robinson and also prisoner of the Gizmonics Institute’s evil baddies, Dr. Clayton Forrester and Dr. Laurence Erhardt or TV’s Frank. They are the ones who shot him into space and left him to watch bad movies. He, Joel, survives by riffing on these said bad movies with his homemade 'Bots. MST3K was so much fun to watch. They found a way to make these terrible movies more palatable.

Now-a-days Joel is "I am also the 'creative lead for media for an aerospace company called Cannea.com – I kid you not" and serving up the riffs with his old cast mates riffing terrible older movies with “Cinematic Titanic.” Founded in 2007, the premise is the same as MST3K, but without a story, they are just coming together to riff on terrible movies. Where Michael J. Nelson, the other host of MST3K created “Rifftrax” featuring riffs of many modern, big named blockbusters, “Cinematic Titanic” focuses on the older and harder to find terribly cheesy movies.  A number of them are ever from the old MST3K catalogue (Santa Claus Conquers the Martians for example).

SO, today I am going to present my top 5 MST3K episodes:

First the Honourable Mentions: The Final Sacrifice/Touch of Satan/Overdrawn at the Memory Bank/Alien from L.A.

There is a couple here, because they deserve recognition. I may have only seen these episodes once or twice; they were so bad that they deserved to be recognized. They had something special, characters that a truly memorable in the badness, or in their badassness? Nope, this category is for the movies that have the most memorable bad characters. These are so bad their good types. 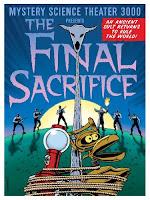 First of the honourable mentions goes to “The Final Sacrifice”, it is about a teenage boy looking for his lost father and an evil cult trying to raise their buried city to take over the world. It features the BEST character ever; the wacky drunken drifter, Zap Rowsdower.

“The Touch of Satan” is a ‘love’ story in a sense. It sense a bad movie! It’s about cursed and homicidal witches, that’s romantic right?!?!? There will be no spoilers here! Go and WATCH IT! :-)

“Overdrawn at the Memory Bank” features a young Raul Julia in this futuristic sci-fi (also love?) story where the arts are against the law. Lawbreaker’s (not just criminals) minds are transplanted into the bodies of animals. All goes wrong when Raul Julia, accused of watching “Casablanca” in his office at work is sentenced to have his mind ‘doppeled’ into a baboon’s body. He ends up in the main computer after an accident where he ejects his mind from the baboon body he was placed into (the baboon’s body was threatened by an elephant). Hyjinks ensue as Raul’s character is now in control of the computer that runs everything in this world.

Finally, “Alien from L.A.” featuring a young Kathy Ireland as a nerdy waitress with a high pitched voice. She is looking for her missing father who is prisoner in an underground city and considered an alien by the denizens of this city. Kathy Ireland must help rescue her father, also becoming a fugitive alien herself. Her voice is the worst culprit, almost muppety; the movie itself isn’t too bad.

A Russo-Finnish production of a Russian fairy tale; it take on the feel of a version of Cinderella (sort of) involving beautiful girl (Nastenka) and her cruel step-mother, a boastful youth  in love with the daughter (he ends up with a bear head for a whiule), an ugly step-sister trying to get married, and evil step mother trying to kill the pretty daughter, Father Mushroom (a wizard that tricks the youth), Baba Yaga (a witch, who also plays tricks), and Father Frost (a kindly Wizard with a powerful staff). It’s a delightful if unusual story, with a full cast of characters, it’s poorly made, yes, but fun and memorable. Check it out!

I have never seen a movie with so many parking scenes and a long club scene with a band performing. That aside, you have the main protagonist who is working at an old movie studio where he discovers a old secret of the studio, and that having your hearts desire isn’t all that it’s cracked up to be. I find that Hobgoblins is just silly. But while the long parking scenes (and I mean scene of nothing but parking) are distracting, the characters and the plot (or sort of plot) is still enjoyable. It is definitely one to check out. 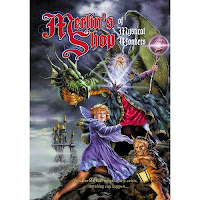 A terrible fantasy movie that feature 2 stories being told by Ernest Borgnine about  Merlin’s shop of mystical wonders. The first is a story of a couple that want a child and the husband gets an old magic book from Merlin’s shop. He begins casting spells that age him, in his last spell he gets the surprise of his life. The second story is about a mechanical monkey that is stolen from Merlin’s shop and is sold to a novelty store by the thief. The monkey has a death wish for anyone it comes near when his cymbals strike. The monkey is a birthday present for a young boy. The boy’s fish, house plants, and the family dog before the family is almost caught in the monkey’s power. Guess what comes to retrieve his monkey and save the day? Go on, guess…..Some of this movie is really silly, but it was meant to be a series with different stories each week that feature Merlin and his Shop of Mystical Wonder. I neat concept and a fun episode of MST3K.

What can I say? Santa Claus! Martians! Imminent hostile take over of the earth on Christmas! You bet! It has become a classic watch for every Christmas, as the Martians, who have no Santa Claus, steal the real deal from earth for the non child-like children of Mars. The movie features a young Pia Zadora (Girmar) as one of the Martian children of the King Martian, Kimar (the mother is Momar and the boy is Bomar. Gotta love the names here).

Number #1 Manos: The Hands of Fate

Manos, what can I say. There is barely a plot. The acting is non-existent. The sound is terrible. It’s not even worth watching, yet I enjoy it anyway. The bumbling Torgo with his familiar “doo doo doo” theme music (not a song really) to the Master’s wives deciding the fate of the woman and her daughter (it involves lingerie wrestling). Manos became such a cult classic with MST that Mike Nelson (the other MST host) turned it into a live event with his Rifftrax (the 1st riffing group creating) event. It’s bad, but it’s worth it to watch it. Some cannot stomach the movie by itself, so I would recommend either riff versions, the original MST3K episode or the DVD of the live Rifftrax event.

Go check out Cinematic Titanic and Rifftrax here!
Posted by Here, There be a Writer at 4:21 PM