Take a Little Trip Down Memory Lane: The Get Along Gang 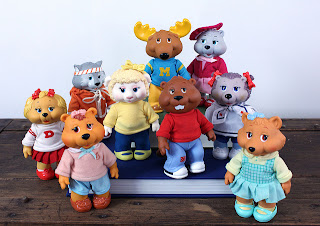 I remember watching the “Get Along Gang” on Commander Tom, long before it aired on Nickelodeon, from the spring of 1984 to Fall of 1985, I could watched the adventures of Montgomery Moose, Dottie Dog, and Zipper Cat, to name a few. It was light heart cartoons about a cool club of kids that have adventures. Did you know that the Get Along Gang started off as a Greeting Card line in 1983 and then launched the cartoons, followed by action figures and stuffed animals (I had the Zipper Doll. Hello! He was a cat…and I am totally a cat person), and books.

While I can’t really remember the details of my TV watching way back then, I do remember watching them and really enjoying the show. There was something that appealed to me. IT was probably that they were animals and not people, after all I was watching Paws Paws, My Little Pony, and Glow Worm (all which were on The Commander Tom Show, with Rainbow Brite. The show was super catchy, definitely and ear worm. The show featured the Get Along Gang is real stories about working together and getting along with others. 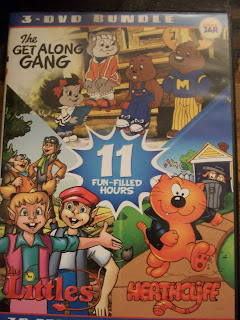 I found a DVD of “Get Along Gang”, “Heathcliff”, and “The Littles”, 3 DVD’s with 10 episodes per disc. I couldn’t resist. Looking back on the show, I realize that the writing is not stellar, but the messages were kid friendly, with good lessons taught. I was surprised by some of the vocal talents like Don Messick (Officer Growler) and Frank Welker (Barker Turtle), two of the biggest voices in the cartoon world.  The DVD features 10 of the 10 of the 13 episodes (Not included on the Mill Creek DVD: Nose for News, Camp Get Along, School's Out, The Bullies, That's the Way the Cookie Crumbles and Snowbound Showdown) and the other episodes are bonus features on Mill Creeks other releases. I still have one of the books, “The Get Along Gang and The Christmas Thief” and a found a Montgomery Moose at my local Salvo. I kind of want to get a Zipper the Cat doll for old times sakes, because he came with skates. There were plenty of “The Get Along Gang” books and comics (I have one of the comics too). The comics ran from 1985 to 1986 under Marvel's Star Comic. 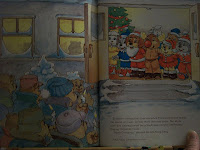 It’s exciting to see a number of cartoons for my era of childhood being released on DVD, Netflix/Hulu, or even making a televsion comeback. It gives me hope that cartoons are still cool to watch, even as an adult.
Posted by Here, There be a Writer at 8:06 PM