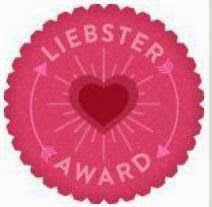 I only recently discovered this existed. It's means to help promote new bloggers, or blogger with less than 200 followers. I was nominated by the loverly: Textploits of the Writerly Persuasion.

I have to answer the 10 question that Tonette has given me and in return, I nominate 10 blog (and in a few cases tumblrs) to be the same thing. It's like speed dating, but more like going to an online mixer. I get to visit all of the blogs that I nominated and the ones that Textploits of the Writerly Persuasion nominated. Give them some love!

First off, Liebster means: Liebster is a German word. It means sweetheart or boyfriend/girlfriend. But in this context means sweetest, kindest, nicest, dearest, beloved, lovely, kind, pleasant, valued, cute, endearing, and welcome. A means to support those in the blogger community who are new and/or deserving of love to keep up the great work with their blogs, tumblrs, etc. I have included tumblrs in mine, because I know some great folks you primarily use tumblr to blog.

Rules are simple, the read the questions I send to you, answer the questions I gave you, tag/link me to your post, and nominate 10 blogs for a Liebster Award (thus telling them you are nominating them). Sit back and enjoy and great to know your fellow bloggers. It's fun and way more inclusive way to interact with reader, followers and peers. I am new to the blogging community and in a pursuit to meet and interact with fellow writers I'd figure I will try this out. It's feels nice to be noticed and because I got notice (it a first step really), I want to pay it forward and give some others a chance. Thank you Tonette! Check out her blog here: Textploits of the Writerly Persuasion

Through a Butterfly's Eyes

The Extraordinary Stories of Ordinary People

10 question to me (from Textploits of the Writerly Persuasion):

1) You. Dinner. Plus five guests. Alive or dead, real or fictional. Name them. Oh, and as a bonus, what’s on the menu?
James A. Owen, Anne McCaffrey, John Lennon, The 9th Doctor, Amanda Palmer.
The Menu would probably consist of Hummus, Sushi, Cheesecake, and Rootbeer Floats.

2) You just won $1,000,000.00, tax free. First off, congrats. Question: what plans do you have for the money?
Pay off college loans, credit card bills, and buy a new cars for me and my husband. Then I probably would take a couple of trips to Hawaii, Australia, and Wales.

3) Ever feel you’re in the wrong place at the wrong time? Pick any point in history you feel you’d most likely fit in the best.
And not get burn at the stake? Hmm, that's a toughie. I love the Renaissance and am interested in The Middle Ages, but I think I would go to the Golden Age of Greece. Live in Athens.

4) Do you believe in the paranormal? Care to share any inexplicable stories with the rest of us?
Yes. Pretty sure I have seen a ghost or some form of apparition at least once in my life. Nothing fancy, but I was at an overlook with my best friend from college. It was a new moon and really freaking dark, but the view very amazing! I turned around to stare at the distance tree line of the surrounding forest. When I saw the outline of a humanoid watching us. It was a dark grey in colour and distinctly different from the shade of black that was the forest. I got a bad case of the willies and we left shortly thereafter. I felt like I had been watched.

6) Do you believe we’re alone (or not alone) in the universe?
Not, not only because I am a Star Trek fan, but as a science and logical thinking person. The universe is so vast that how can there NOT be life elsewhere.We just haven't gotten around to officially meaning.

7) If you were offered a seat on one of the first spacecraft excursions they’ve got planned, would you go? Why or why not?
Not sure. I have this thing were I like to be out in the air and sunshine or moonshine (even though I am currently freezing my arse off). I am not claustrophobic, but if there is there a name for that kind of fear, that's probably what I would have. I am not sure I could handle the inter-stellar traveling, being closed inside a spaceship/starship (think like the Enterprise). I would most likely consider it though. Maybe if I could sleep through it, it wouldn't be so bad. Maybe! Yet, I would love to travel the universe via Tardis ( if possible). But that is a bit different type of travel isn't i? I am curious to see other planets, so I think I would.

8) Have you ever done or said something you regret, only to take it back and make things worse? (Uh, no. I’m not asking leading questions that might potentially albeit anonymously find their way into one of my books because, really, that would be wrong, but seriously, inquiring minds want to know, right?)
Yes. When my Ex and I stopped being friends after being in a relationship for a few years. She wasn't willing to accept that we loved each other. I was the one who admitted we were in a relationship. We were both childish and didn't admit our true feelings until it was too late. We both let distance between us. I regret how I treated her when we met up after years of not talking to each other. The friendship completely dissolved, felt bad, but had to learn to move on.

9) What is one thing you regret NOT doing or saying, and to whom?
I try not to regret. It is awfully wasteful of energy, but if I have to regret, it would probably not making the jump into writing sooner. I feel like I lost a lot of time writing and getting myself out there. I know, it's never too late, but sometimes that thought creeps into my head and makes me feel less an adequate at being a writer. I do push it aside and move on. I have too many plans and projects to let regret get in the way.

10) What did you have for breakfast this morning (or the morning you read this question)?
Organic Cocoa Puffs

10 questions by me (I stole a few, because they were really good questions):

1. If you could live anywhere, real or fictional, where would you live? Why?
2. What is one thing you regret NOT doing or saying, and to whom?
3. If you could take a 1 month trip anywhere, money is not a worry or consideration, where would you go? What would you do there?
4. What is your most treasured memory?
5. Whom do you admire the most? Why does this people inspire you?
6. What did you want to be when you grew up (doesn't mean you have to stay grown up forever)? Has it changed? If it has, what is it now? If not, why have you kept the same?
7. You. Dinner. Plus five guests. Alive or dead, real or fictional. Name them. Oh, and as a bonus, what’s on the menu?
8. Favourite author and why?
9. If there was one mythical or fictional creature you’d get to keep as a pet, what would it be?
10. You are writing your life story, what’s the first line?
Posted by Here, There be a Writer at 12:33 PM