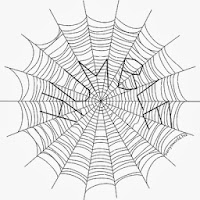 Look at it, indeed! It has been a book, an animated movie, a stage musical, and a modern live action movie. I think one can say that it ranks in the upper echelons on people’s hearts and memories of their childhood. I grew up on Charlotte, both in book and animated form. Each holds a special place for me.

Maybe not after I write this review? Okay, here does nothing...

I am so familiar with the animated movie that I think I can quote it forwards and backwards and sing all the songs. I was partial to Templeton myself. It was a favourite when we would go and rent videos from Tops Market, back when it was a thing to have video rentals at grocery stores. I also read the novel many times growing up. It wasn’t until years later that the live action movie was made (which I didn’t watch until this review); and later still when I encountered the musical adaptation when I got the chance to direct a full scale musical of Charlotte.

So, how do I feel about the movies?

Honestly…I was surprised by how each one fared. There is something truly amazing about this story. Each version I has held something different with me, yet there was still something marvelous about it. Here’s the thing, most of the time when I compare the original source material to a modern adaptation-in this case novel versus movie-I find all the differences that the author or screenwriter puts into their work. This time I not only saw these differences (from book to movie to musical), but I saw a number of elements, lines, and nuances that are in every single version of Charlotte’s Web. That's amazing that a story can captivate people so well and inspire them to tell a story that continues throughout the years, throughout multiple adaptations. In every version the story is always there, with many of the same lines, go from the book to the movies and are even seen present in the stage musical.

What I did find fascinating is that with these two movies-at the same length (only a two minute difference in the run times)-the recent live-action movie did more with the original story than the animated movie did. I find it tough to swallow, but the 2006 live action movie, made by Paramount/Walden Media (same as "Bridge to Terabithia") /Nickelodeon is the clear winner.

Now, why would I say that, straight out of the gate in this review? Because sometimes I am wrong with my

predictions of how my reviews go. I usually tout that books are always better (most cases they are), but this time I feel the adaptation, the 2006 version is at least as good as the book. I went in wanting to find fault with the 2006 version featuring Dakota Fanning. See, I grew up watching the Hanna Barbera movie from 1973, with Debbie Reynolds as the singing spider, Charlotte and Paul Lynde as the smart ass, snarky rat, Templeton. I sang the songs, recited the lines, and probably even wished for a pet pig when I was a kid. But there is something magical about E.B. White’s story that keeps that magical child-like innocence, but so does the 2006 movie. I see it as the closest representation to the original story out there.

First, the novel does not have songs; it’s a story first and foremost. The 1973 version, even though it’s terrifically hard to say, but the songs feel tacked on. They don’t really add to the story, but if you were to take them out, you would still have a compelling story. This is not to say that I don’t absolutely love the theatrical musical version of Charlotte, because I do. The songs featured in the musical are far more designed to tell the story of Charlotte, Wilbur, Fern, and Templeton. You have far more character development in songs like “Eating”, “Whose Says We Can’t Be Friends?”, and “Charlotte’s Spinning Song”. Where the only song or two in the 1973 version that fits “Chin Up” or even "Mother Earth and Father Time", they are the most lovely and I like them. Debbie Reynolds is singing too. The songs were done by the Sherman Brothers who wrote songs for Mary Poppins, The Jungle Book, and Chitty Chitty Bang Bang (much of their careers were when they worked with the Mouse). So, the verdict with the music, not necessary (I will feature a more detail review of the musical in greater detail at a later time).

I never hated the 1973 animated movie, but after some of the following considerations I have altered my view of the animated movie.By adding unnecessary additions to the plot drag down the story from Jeffrey the Gosling, who is supposed to be a side-kick to Wilbur. Maybe it was cuter when I was younger, but looking at it now, it is unnecessary and he was an annoying character with no relevance on the core story.

Another one is that Wilbur in the 1973 version is a very whiny and kind of a brat, something that the novel doesn’t feature heavily on, nor the 2006 re-make, or even the musical. Wilbur is a character that starts off young and kind of naive, but learns and become greater than himself. It's like any journey story, the character grows and changes as the story progresses. I feel that the 1973 movie is a poor representation of his journey, as he spends more time whining until right at the end. Where it’s forced into the last 10 minutes.

Something else, Wilbur doesn’t not talk until he arrives at the Zuckerman Farm, which isn’t obvious in the novel as it is in the movie. The goose ‘teaches’ Wilbur to speak. It feels not only unrealistic, but forced. In the musical,Wilbur talks from the get go, as he does the 2006 movie, even though you don’t hear him until after he arrives at Zuckerman’s. There really isn’t a need for Wilbur to talk until then, and then I prefer it to be that he just starts talking normally, as if he always knew how to talk. He didn’t really have anyone outside of Fern to talk to, so it does make some degree of sense. 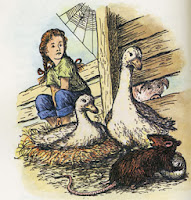 There are a couple of items that were omitted in the 1973 movie that are most crucial to the story. First, Wilbur’s attempt to escape the farm is not even mentioned. Wilbur makes a break for it and breaks out of his pen. Yet, when presented with freedom, he chooses the farm and food over the freedom of life outside the farm.  It’s a critical moment in the book, and it’s not even acknowledged in the animated movie.   There is also the scene in the barn with the rope swing, prior to the rotten egg stink bomb. It not the most important of scene, but there is something about seeing Fern swinging on the rope just prior to Avery trying to get Charlotte for his collection. It really a short scene, but it gives you a feel of youth on the farm and lazy summer days playing. Also, there is the exclusion of the Gander. You never see the Gander in the animated movie.

The 2006 re-make includes all of these and it enriches the story for the better. I feel that each of these items weakens the story when not included. There are a number a points that strengthens characters that without these points lessens the story as a whole.

The 2006 movie is not without its flaws either. They made Fern a bit too aggressive in saving Wilbur’s life. She all but takes Wilbur from her father, when originally he acquiesces and give Wilbur to her to teach her a lesson about farm life. It’s not so much that I can’t believe someone wouldn’t do that, but Fern is supposed to be eight years old and naturally it feel weird to have her act so mature. Maybe it's a Dakota fanning thing? There is also a whole scene where Fern takes Wilbur to school and keeps him in her desk. It feels like fluff. It contributes nothing except a bit of cheap humour. And with the addition of a couple of crows that torment Templeton throughout the move, it doesn’t add to the story. Overall, these are not enough to hate the movie, but acts as distractions. So the 2006 movie stands pretty strong on its own, regardless of these details. 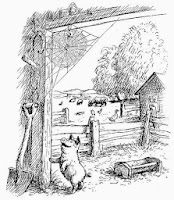 What was good in each of these versions? Well, the dialogue in much of the story is word for word from Novel to Movie. Granted the movies have much more dialogue-as a movie hedged more on dialogue than a novel. But many of my favourite lines are in each, if not every version, "I only distribute pigs to early risers. Fern was trying to rid the world of injustice," or "You lack a sets of Spinnerets and you lack know how."  The story in itself is timeless, even if you were born far removed from the time that the story is set in, you can still relate to the characters. That is probably the biggest reason why I still go back to the story of Charlotte’s Web.

I feel compelled to note that after this review, I may have a harder time watching the 1973 movie, because it is the lesser story. Heck, even the musical’s story is much stronger character development. It feels as though the story doesn’t need music to be told, which makes the novel and the 2006 movie the clear winners here. But, I am not excluding the musical here, after all, the way it’s told and the songs are truer and stronger to the character’s personalities. 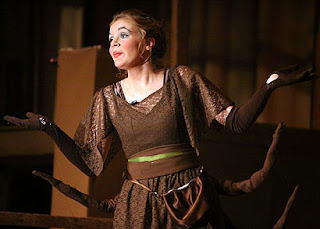 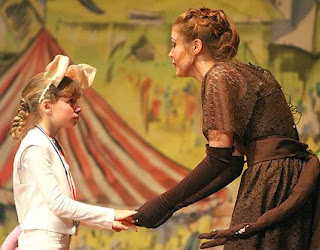 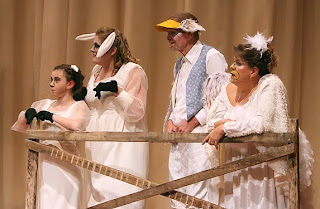 I had a blast traveling down memory lane with these stories, some of which are deep rooted in my history. I hope you have enjoyed traveling the yellow brick roads and the roads to the Zuckerman’s Farm. I am always looking for Book to Movie Adaptations for future review, but after this month I plan to make October my Adaptation Month. You can leave me a comment in the box below with a suggestion and maybe some love.

Photos from Lake Country Players, and Google Search
Posted by Here, There be a Writer at 7:54 PM