Bridge to Terabithia: Book vs. Movie 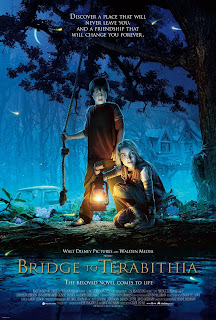 It’s a good enough adaptation to strand with or without the novel. The greatest crime is that it is way more Disneified than the novel.

Honestly, what did I expect from a Disney movie? Probably what I hate most about Disney and their movies. The saccharine sweet story plot? The not really defined characters? Or maybe, the addition of additional material unrelated? It’s true that all three thoughts ran through my head. Truth time, I couldn’t see anything but a relatively good kid’s movie, with a pretty awesome story and even good lesson attached to it.

Oh, there are things that I really hate, such as the attempt to pull the story into the 2000’s, when the original story is set in the 1970’s. I find that many film adaptations have forced modernization of the story, Terabithia is not a stranger to this. The biggest case of this is when the teacher tells the class that the use of electronic devises will not be tolerated. It could have been dropped and none would have noticed.

But as a whole, the movie is really very similar to the book. There are the standard items that got altered and things were added. Something that occurred to me during the writing of this blog is that a novel (in the general sense) does well with,  more often descriptions and scene setting; where movies tend to rely on action to move the plot, although dialogue is equally as important.

After re-reading the novel, I discovered that much of the story that was changed for the movie was changed 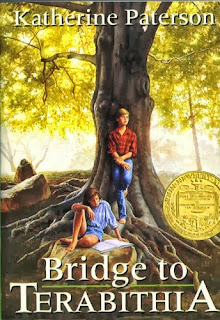 because it wouldn’t work in the style of a motion picture. The opening scene of Jess waking up to run in the morning in the book as a lot of subtext and internal monologue that doesn’t always lend well to a movie, while in the movie it’s more of a non-dialogue montage of Jess’s morning ritual. Both versions are valid, I may prefer the novel, but at least with this movie I can understand the motive behind the scene.

What I love about the book is the raw gritty feeling of the characters. They feel like real people, and as the author based the lead characters on her son and his friend, you can imagine Jess and Leslie as real people, even the bullies in Lark Creek are real Janice Avery and Gary Fulcher. It’s that realism that draws me into the world of Lark Creek and Terabithia. it makes me feel like I am actually there.

Terabithia in the movie is needs to be obvious, as it is through their imaginations are what fuel their reactions to their own worlds. It’s basically their defense mechanism to how they deal with their world filled with Janice Averys, Gary Fulchers, and Mrs. Myers. How often have we as children had an imaginary friend and make believe land that allowed us to be free, to sort through our problems? I know I did. Stylistically, Terabithia mirrored Lark Creek in the same way. That made me closer to the characters, in a greater way than the book had. Not a bad representation.

Not to say that Disney and David Paterson got it all right. There was the change in the dynamic between Leslie and her parents. She much more connected to Judy and Bill (as she calls them) in the book (and it’s Bill who is fixing up the house with the help of Leslie), where the movie forces the family to suddenly be close during the Golden Room painting. It feels much too Disney and a bit distracting. It’s like putting that scene into the Disney machine and cranking the crank and out pops a saccharine scene of familial bonding.

Or making the father work at the hardware store, instead of driving all the way to Washington for work. It feels less right. Maybe I am too accustomed to the original story, but when we see the struggle of his father leaving early everyday and returning late at night, it packs more of a punch that they are struggling.

I do love that the Twinkie scene with May Belle (Jess’s little 6 year old sister) and is mostly word for word, action for action. That makes me happy. It a crucial scene, when Janice Avery is about to get her comeuppance. Or when Leslie asks to go to church and May Belle says, “Don’t God damn you to hell if you don’t believe in the Bible?” The actress playing May Belle says it with such conviction; it gives me a warm feeling of damnation. It plays nearly the same it either version and it’s just a really touching moment in both versions.

Even with the death of Leslie (crying as I typed this), you can tell that both the book and the movie were a labour of love, handled with care, and treated with the right amount of respect that a Queen of Terabithia should be treated with. It is truly an awesome scene to read and watch, both are poignant in their own ways. The book simply because the words just feel right, and the movie, because not everyone can treat death in a movie with that kind of respect.

And, honestly, the acting is really pretty good too I can believe, even if they age some of the character a bit more. Robert Patrick (T-1000 from T-2: Judgment Day) play a great father and AnnaSophia Robb really makes Leslie stand out, although her Leslie at times feels a little more obsessed with Terabithia than the book Leslie. Zooey DeChanel is the perfect fit for Miss Edmunds, the hippie music teacher and it utilizes her guitar and singing skills perfectly.

But over all a very pleasant adaptation.

Which would I honestly prefer? I am not sure I can pin it down, as both are equally good. I will always like the novel just a tad bit more (it’s the literary geek in me). I recommend anyone to read it, it is a beautiful read. For the movie, I’ll give it a 8 out of 10.

Up next: "The Wizard of Oz"