A Wrinkle in Time: Book vs. Movie

I wanted to like this movie. I really did. After all, “A Wrinkle in Time” is one of favourite young adult fiction/science fiction-fantasy novels ever. I first read it in 8th (or 7th) grade in English. It was one of those books that gave me a warm feeling of happy when I read it, even years later it still holds up.

The movie, not so much! It’s not for lack of trying either. I tried to be forgiving. I tried to see it from all angles. I even tried to see the movie as a story for folks who may not have read the book before (a harder task indeed). But, the movie did so much wrong, even when they got things right. It doesn’t help when the CGI and green screening is pretty terrible.

I could go on and on about Madeleine L’Engle’s books, but I will say this, the woman knew how to tell a story (several in fact). A writer of Christian faith, as was C.S. Lewis, she found a way to use her beliefs and yet not ostracize readers of different faiths. I hardly knew that back in 8th grade. After reading the Time Quintet (as they are called) year later I see how she connected faith, art, fantasy, epic battles of good and evil all together into an amazing set of stories. If you get a chance to read any of the Time Quintet series, I highly recommended them: “A Wrinkle in Time”, “A Wind in the Door”, “A Swiftly Tilting Planet”, “Many Waters”, and “An Acceptable Time”. The best part is how she connects all of her books through her characters, even after the Time Quintet is over.

I think the appeal of L’Engle books are because her characters are real. People can relate, sympathize, and even empathize with Meg, or Calvin, or even Charles Wallace. I know was quite the awkward kid growing up being tall, or feeling very inadequate around my classmates, maybe coming from a poorer family, or only child, and also being terribly shy.

Okay, back to the review! Like I said, I wanted to like this movie. I had see it sometime earlier (alas, I cannot remember when) back when I hadn’t read the book in a while. I remember not hating it then, but totally liking it either. It was a Disney movie after all (not even accurate statement, as Disney just distributed the movie). It was made in Canada by a Canadian production company in 2003. After re-watching it, it feels much like a Disney movie. See, there is a formula to many of the Disney movies that are made now-a-days and often this formula is used by others to get the “Disney Effect” for a movie.

This is what happened with this version “A Wrinkle in Time”, it has become a Disnefied version of the original story.

What is it that makes this movie so terrible?

What I find bothersome about “Wrinkle” the movie, is a number of things; things that any storyteller or avid reader would agree with me on. There is weak character development. It truly bothers me when characters are not given a personality and there is no development. It’s even worst when I am watching an adaptation and I know there is a character there, but the movie doesn’t convey it. The biggest example of this crime is poor Calvin O’Keefe; he just sort of rides into the scene and sticks around throughout the story. You do not feel vested in him as a person, and the ONE time they try to give him back story, it’s pushed off as barely important, when in fact it is. It’s really kind of sloppy writing if you think about it. Calvin is the popular kid at school. Smart and athletic, but he comes from a horrible family; one of several siblings and a mother that hardly care of his well being. The book shows how Calvin, despite his near perfect exterior, is just as fragile as Meg. The movie Calvin I hardly care for, yet the book Calvin, I can feel for, even empathize with. He is just a pretty face in the movie.

It’s not just Calvin, but Mrs. Who, Mrs. Which, and Aunt Beast are not fully developed, in some cases they are barely touched upon. Aunt Beast is hardly mentioned, and her name only brought up by Calvin in conversation. You get a whole scene within the novel with Meg and Aunt Beast because Meg was frozen by the Black Thing (IT); in fact Meg even gives Aunt Beast her name. Even more irritating is Ixchel, the planet where Aunt Beast lives is barely explained and even falsely represented. That is actually a greater crime than poor character development, when a movie falsely represents something. Ixchel is a planet within the same solar system as Camazotz (where Meg’s father is a prisoner) that they escaped to from Camazotz. This is not mentioned at all, there is no conversation between Meg and Aunt Beast about the Black Thing and the battle that Ixchel fights everyday, and the failure of Camazotz in the said battle. Even the representation of Ixchel in the movie is wrong; it’s a world of grays and brown, but beautiful scents and birdsong, not a frozen icy world. It may look pretty and flashy, but it’s wrong. I know, those who haven’t read the book, wouldn’t know, but it feel terribly wrong when you don’t at least have the moment between Meg and Aunt Beast.

You are introduced to Mrs. Who and Mrs. Which much later on the planet Uriel, while in the book each of the ladies are already on earth. Mrs. Who even interacts with the world by stealing bed sheet, while the movie just has them showing up on Uriel. Mrs. Which is not even represented properly. She is the oldest of the three and barely keeps corporeal form, but she is also the wisest of the three. Yet the movie makes her the prettiest and she actually insults Meg outright. I cannot understand why this change occurs outside of the reason that maybe the actress prefer to portray Mrs. Which in that way. The ladies are supposed to me non-corporeal energy beings, like angels. It makes the whole interplay between Meg and the ladies different, not as strong.

Something else that really bothers me about “Wrinkle”, it feels too long. With a run time of 128 minutes in far surpasses the 90 minute children’s movie span. Bet you didn’t know that this version was originally made to be a 2 part mini-series, which I think is the reason for the extra long exposition and the longer running time. It still feels like they were trying to cram extra character development and background information into the opening. Meg Murry is one of the few character that is developed, but much of her development is geared toward awkward emo teens. While Meg is clearly the awkward protagonist, they tried far too hard to make her a mopey emo teenager. Meg’s problems are very real, and part of the story, it just feels that the screenwriters tried too hard to show Meg as the struggling awkward genius and it just comes off and lazy and moody.

Also, the ancillary characters in “Wrinkle” are supposed to be far harsher than the movie portrays, whereas the movie sugar coats much of the real tension between Meg and her teachers, class mates, and family. These are things that define Meg as a character and when you make the character and her world less than what was originally written, you give less value to the story as a whole. Meg is a troubled character. She NEEDS to grow, find her faults, deal with her feelings, and become the person she is supposed to be, but she is also a character with emotion and that emotion is just as important and shouldn’t be skimped on.

I love the story of “Wrinkle” because it feels real. The characters feel real. You see and feel what Meg is feeling, you know how she distrusts Calvin at first and then starts open up to him without a forced attempted at a relationship. Never mind that in future books Calvin and Meg do get together. The forced relationship just makes Meg and Calvin’s relationship in the movie less valid. You need to see where they are and where they go, because hands down it’s a journey story.

What draws me to “Wrinkle” is the truth deeply embedded in the story. It’s a story of everyone’s journey to find themselves. And anything I have ever enjoyed has been on a journey, from seeing new places to discovering new things about the world and myself.

As movie, “Wrinkle” falls so very flat; not just in the delivery, but in the purpose. While the acting is not terrible, it not stellar, there was so much that could have been done. I give Alfre Woodard, who played Mrs. Whatsit, she did a good job with the role. It was one of the better representation, she made Mrs. Whatsit real. The others were not given enough to work with, and what’s worst what they were given was incomplete or wrong. As an adaptation, it doesn’t work. Too much was changed and reworked to it's detriment. As a movie, it’s just barely watchable; even if you never read the book, I think you would. It has far too much exposition and tells you far too much, while not showing enough. It may be okay for a kid’s movie, but only if you don’t care to think too deeply.

Time to rate this puppy; I give it a 4 out of 10. Why? It was relatively true to the books, in some facets. There was some character development, but not enough for me to care about the characters. It would probably do well if someone riffed it, otherwise I will stick with the book.

Next week, I tackle “Bridge to Terabithia”. 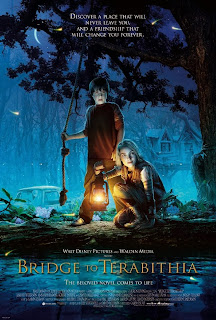