Yesterday was also the final performance of Corning Community College's Muse of Fire production of the musical adaptation of Love's Labour's Lost and the day before was the final performance of the Keuka Lake Player's production of Macbeth, so its been a month full of Shakespeare. Also, The Lake Country Players are filming a movie adaptation of the Bard's 12th Night shooting this summer. So, yeah, lots of Shakespeare in 2016.

I felt inspired to write a sonnet (which I have become quite adept at) taking pieces of Macbeth and Love's Labour's Lost in my own tribute to the Bard from Stratford-upon-Avon. If you have never read a Shakespeare play, or seen one performed, you are missing out. I realize that the language is a bit to grasp, but there is something liquid to his words, especially when performed. Listen to an well performed soliloquy and you'll see (hear) what I mean.

Within the wood of Birnam do you go,
Searching for blood, reconcile the tyrant.
Spoken by the sisters three they echo, 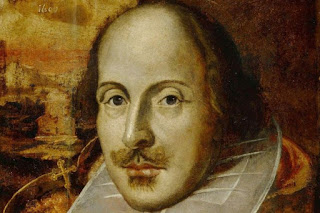 When love’s vow is proclaimed against the rule
And you feel unjustly cohearsed by might
And the world you know has become that cruel,
Only by chance can one, an ending write.

Two stories told to the audience be
A miraculous joy, mirth and mayhem
With hardly poor players upon stages see
A tale “told by an idiot” poem.

Has been done since the 16th century,
Not bad for a tanner’s son that he be.


Dear Readers, if you are a little lost, please check out Brows Held High's video on 400 years of Bardoltry here. There is also his review of the Kenneth Branagh's version of Love's Labour's Lost here.  The version the CCC did is a modern adaptation of Branagh's version wit different songs. 'Twas an enjoyable and funny version, something a little different.