What do you know about French Fries?

Yeah, one of my best friends, Sara, suggested I blog about French Fries...

...clearly Friday afternoons are great days to get ideas from friends. And I am never one to give up on a challenge, therefore I will blog about French Fries and make it interesting.

You see, Dear Readers, I usually ask for poetry topics and write a poem with said topic. Today is clearly different. Write a blog about French Fries.

French Fries are not French. I know shocking. Or maybe not. Maybe they are?!?!?

Some say the Belgians were the first to fry the potato, others give credit to France, still others say that Spain is the forerunner of the fried potato. Spain was said to find the potato in an abandoned Colombian village and brought it back to Europe. No one is really sure if France or Belgium was the first to receive the potato. At that time Spain controlled much of Belgium. But...Spain started it all it seems, bring the ground apple "Pomme de Terre", as it is called in France to Italy and then onto Belgium and France.

It feels like a urban legend, who created the first french fry...

In Francethe story goes that a French medical soldier fighting in the Seven Years War is credited with discovering the potato, because he was captured and sent to Prussia as a POW where potatoes were given out as the rations. Here he learned about the tuber. After the war he brought it back to France and had to convince his fellow countrymen that it was worth eating. You see-at that time-he French thought potatoes were thought to cause disease in humans (History of French Fries) and only fit to feed to pigs.

Imagine that!
The potato came to Europe and was expanded on by Belgians and French alike, add the Dutch to the list of potato lovers.

The Belgians and Dutch do love their potatoes. They have street vendors everywhere dedicated selling "Frites" or "Patats" (in Holland) in paper cones and served with a creamy mayonnaise (not like the American kind). While they love to eat their potatoes with just a sauce, the French ate their potatoes often with meat (steak was a popular choice).

Only after the potato war begun, about who invented the Fried Potato did the tuber make its way to England and America. The British called them chips and Americans called them french fries. Which I think is not really confusing, but that's because I like a number of British things and have taken up calling fries chips.

I have never had chips done in the style of British, Belgian, or Dutch (a personal account of a Dutch born chip lovers) and am seriously curious to try them. All that I am  used to are the standard American chip-the thinly sliced sticks of potato. If you were to ask me where are the best chips or fries I would have to ponder a bit. You see I am not a fan of most fast food restaurant fries, as many are too greasy, too salty, too over cooked, or not cooked enough. This includes the the biggie chains, McDonald's and Burger King which I don't generally frequent as of late.

I am definitely a french fry, chip person. Usually, when I order at a restaurant one of my side choices is (most) always the golden thin deep fried tuber. I love dipping chips in barbecue sauce, honey mustard, ranch and even ketchup.  But my favourite way to have chips is with malt vinegar, a little pepper, and some ketchup. 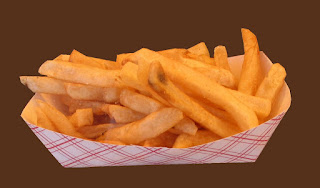 Of places to eat chips at (and I have an affinity for all things British). Hell, I would love to have chips with the Doctor (yes, I am a Whovian). The thought of walking down the street with  paper cone of chips and Capaldi or Eccleston makes me giddy. Okay now I am starting to wander. I have had french fries everywhere, okay maybe not EVERYWHERE, but they are really common around here. So, maybe I should tell you, Dear Readers where I love to eat chips. Below is my top 5 list of best chips (fries) in town (or elsewhere):

1. Five Guys Burger and Fries, Big Flats and Ithaca, NY - made with fresh potatoes right then and there.

2. Smokie's Restaurant, Kanona, NY - A truck stop that is a favourite hangout post theatricl shows in the Bath/Hammondsport area. I more standard french fried potato, but a nice crispy consistency and not overly salted.

3. Sorge's Restaurant, Corning, NY - if you want good local Italian cruise and a friendly atmosphere, check them out. Their fries leave a little bit of the skin on them, not too crispy, but  not raw either. Perfect with a bit of pepper and malt vinegar. That is a British thing, dousing chips in malt vinegar.

4. The food stand at the Farm Festival in Fredonia, NY - I don't know if they are still in operation, but this family own an food stall that would go around to all the outdoor events throughout the are. They would take a whole potato and make into into a pile of curly fries. Worth the 2 to 3 dollar price. It was like a meal in and of itself. Cover it in vinegar and some ketchup and you have a party! And in answer to your possible questions, Dewar Reader, the Farm Festival was a weekend arts and crafts, farmer's market, and music in festival form at the end of August in Fredonia, NY. A perfect way to end the summer. It still is running as far as I know.

5. Alton's, Cheektowaga, NY (2250 Walden Avenue)  - My favourite restaurant to frequent when visiting the Buffalo area. They have amazing Greek cuisine and the best sweet potato fries ever. I didn't talk about he possibility of sweet potato fries, but yeah...its a thing. Fries made out of sweet potatoes. Alton's sweet potato fries are lightly crispy and served with either a butter sauce or honey. Excellent either way, or you could take the dill sauce that comes with many of the Greek dishes and dip the sweet potato fries into it. Also very tasty.

Little ground thing, grow
Little round thing in the dirt--
Want you in ketchup

And for a little fun see Sara's commentary brainstorming (because when you read her parts it is funny). I love you Sara!!

--where you have had the best and worst of them.
--how you like them.
--how you feel about french fries and how weird it is that British people call them Chips and call Chips Crisps, and how Billie Piper makes them look like the most delicious things on earth

--OH! and how they compare to other methods of potato preparation
--Sorry. I don't have an off switch.
--working on it
-- :-P
It should be noted that she is right about Billie Piper (Rose Tyler from Doctor Who) does make chips seem like the best thing EVAR!!!!
Leave me a comment about where your have had the best fries, chip, patat, frites, etc. What are your favourite dipping sauces? What do you like with your potatoes? Do you prefer other forms of tubers?
Posted by Here, There be a Writer at 9:00 AM