The Animated Adventures of Tom Sawyer

Okay, after stage managing a children's production of "The Adventures of Tom Sawyer" I realized that I knew nothing of the original story. This is my closure for the summer of Tom Sawyer. 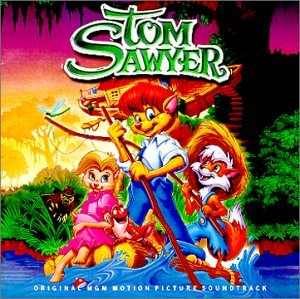 I am NOT blogging about the original 1876 Mark Twain novel, but the 1999 animated movie rendition by MGM called "Tom Sawyer".  I discovered the DVD  in the $5.00 bin  at Wal-Mart. I couldn't help but buy it and hope that i hoped it was going to be delightfully terrible. listen to this, it features a cast of country singers and anthropomorphized animals. Sounds wonderfully awful, right? It also features Betty White and Don Knotts. Also a selling point, right?  All these things were enough for me to fork over my $5.00 dollars to buy it.

Note: let me say that I do plan to read "The Adventures of Tom Sawyer" by Mark Twain in the near future, so I can understand the original story.

I am basing most of this review/blog off of the theatrically production that I was recently involved in, while it is also for children, it still retains a fair amount of the original story, as does this movie oddly enough. The theatrical production includes a slew of songs (different form the movie). It was written as a musical, but the songs can be removed and it  performed as a straight play as well. Our production (available through Dramatic Publishing) we did as a non-musical, it was a fun story. I really enjoyed it (makes he want to read the novel now) The kids really did a fantastic job learning the 1850's southern dialect, by the way. 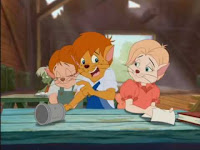 Plot (includes changes found in both the theatrical and the movie version): Tom Sawyer is a boy and includes his adventures going to school, getting into fights (theatrical version), getting into trouble (with ticks or frogs depending on the version), and playing with his best friend Huckleberry Finn-a free spirited child of the world. Tom falls for Becky Thatcher (a new girl in the movie), after he already having been in love with another girl, Amy Lawrence at school. Tom and Huck discover the plot of Injun (Injurin') Joe, Muff (Mutt) Potter, and Doc Robinson (in the play version) and witness the death of Doc Robinson (Deputy Bean) by Joe. Muff (Mutt) is framed and Tom and Huck have to keep mum. They end up running away and are perceived as dead, until they crash their own funeral. Tom saves Muff (Mutt) from hanging and Joe is discovered as the murderer/thief. After the congratulatory party, Tom and Becky wander off into MacDougall's Cave (Dead Man's Cave) and discover the treasure. Joe is killed/dies and the kids find they can go back for the treasure. Happy Ending! The end. 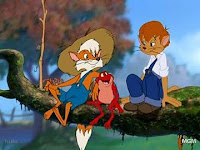 Now, the movie is fairly similar to the novel, at least based on the Wikipedia plot synopsis. To be fair, each version is different, and each version has made changes, as I'm sure some of the other movie versions that also exist out there. For a kid's movie, it's oddly accurate to the original. Some of the changes made to the movie that clearly stand out for me, I can at least understand why.

First, is renaming the characters of Injun Joe (Injurin' Joe) and Muff Potter (Mutt Potter). It's a small pet peeve, but still. Makes it lose something just to get use a gag. Then there are other characters that are completely changed, like Doc Robinson, who is now Deputy Bean and without the same motivations. Doc Robinson was grave robbing (implied) with Injun Joe and Muff Potter in the theatrical version. I'm sure that the reason Injun Joe got changed, simply because of the racially sensitive nature of the world in 2013.

Characters that are perceived as different, or poorly represented. Muff Potter in the theatrical version is a shiftless loafer and the town drunk, but harmless and often helps the townsfolk. In this movie he is portrayed very poorly, with little to no back story and a bad memory. It makes his character less important in this version than the play version (and possibly the novel). As for  Deputy Bean, who is visiting his wife's grave-the scene in the graveyard plays different in the theatrical version, but with the same outcome, murder (in a kid's movie too). I realized that the changer in character means that the murder has to be adapted into the new scenario with just Joe and Mutt, whereas the theatrical version has Doc Robinson grave robbing with the help of Injun Joe and Muff Potter and Injun Joe betraying Muff by killing the doctor.

As a movie, it is pretty cohesive and falls within the 90 minutes time frame (for a children's movie), but that's doesn't mean that I consider this a great movie. After contemplation, I give it a 6 out of 10. It's not a classic, but it's not down right terrible, yet not completely boring, just slightly above average.

Most animated kid's movies seems to fall into the musical realm.n Why? Not entirely sure! Music is a great way to engage kids, but if not done well, it falls by the wayside. While this is not always a bad thing, when the songs fall flat in their delivery then it makes the movie much weaker. The movie falls into the county vein as 90% percent of the cast are county music artists. This means that the soundtrack is also country heavy, oh screw it, it's a various artists,country album. I am not normally a country fan, but that has nothing to do with why I can't stand the music in this version. All of the songs feel thrown in. It feels like someone said, we have songwriters in the cast let's have them write and sing some songs. Half of these songs tat are not even needed, like "Leave Your Love Light On", which is sung by the Preacher. It could have been cut out and the story still remained in-tacked. Of the 8 songs, only 5 are even really songs that support the movie. The last song "Never, Ever, and Forever" is the standard end-of-the-movie song and not really needed either. It's felt awkward when the 2 lead females (Amy Lawrence and Becky Thatcher) are double cast, having different speaking and singing voices. It feels like overkill or they were appeasing someone, somewhere.

I know I am being harsh on a kid's movie, but some many animated movies get made now-a-days that I think people forget that you still need a decent plot , good voice actors, and you don't always need musical number to support your storytelling. Show don't tell!

There are things that could have been cut out and things that should have been left in and it still could have been with the 70 to 90 minute time limit. To me, Mutt Potter (played by Don Knotts) deserved a little more than a poorly developed bit part. In the play version, at least, he saves Tom and Becky from MacDougall's Cave (called Dead Man's Cave in the movie). Betty White was Aunt Polly and while she did a fantastic job with what she could have been showcased more. She seemed like her character was just there and not part of the story. She is just Tom and Sid's Aunt, or when Tom's been bad she punishes him and makes him paint the House Boat to teach him a lesson.

Hey movie, way have talented voice actors and not use them! I certainly hope it wasn't because they weren't country artists.

Not to down play anyone, but Rhett kins and Mark Wills, who can obviously sing-they  played Tom and Huck-did not sound like kids of 11 or 12 that go to school, play hooky, and go on adventures. From a realism perspective, it didn't feel convincing. I know they needed real singers who could see their songs, but why have to grown men in their 30's play children who are 11 or 12?  At least men in there 30's who can play 11 and 12 year olds. I know I mentioned the double casting of Amy Lawrence and Becky Thatcher (Clea Lewis and Hynden Walch), but really they sound like younger girls and both of whom are voice actors. Hynden has played Starfire in Teen Titans, Princess Bubblegum in Adventure Time, and Harley Quinn in Batman; while Clea Lewis has appeared on Spongebob Squarepants. These are voice actors that sound young and while their singing voices might not fit the songs. Truthfully, I actually had no problem with Alecia Elliott and Lee Ann Womack singing for Amy and Becky. To me, would may have helped the general feel of the show double casting the 4 lead: Tom, Huck, Becky, and Amy.

As for the over all quality, as I said earlier, it felt average. It was just good enough to be enjoyable, but not stellar. I could enjoy watching it for it what  cheese factor it did have. I love watching really bad or cheesy movies. I love to see over acting when possible, as Christopher Eccleston did in the movie "The Seeker". That is a case of bad movie and one that I would watch again, because of all things they got wrong (and there were plenty), but also there were things that they got right, or at least utilized right, like Christopher Eccleston. Man, I love those blue eyes! 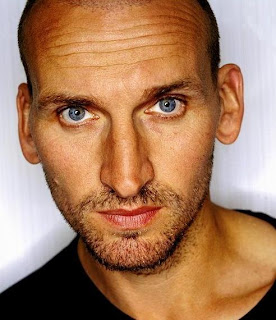 "Tom Sawyer", you are not the best movie out there, nor you are even the most decent one. You are very average as a whole, but you do have Betty White and Don Knotts! You also have Rebel the Frog, who is the Tom's pet, is clearly the comic relief of the show. Something else, Injurin' Joe's, he was interesting, a violent sort and his death scenes, yes he dies about 2 or 3 times, are worth watching this movie. The animation is 'purty good', by 1999 standards anyway, but the CGI river boat at the beginning and end really looked out of place. Not very well done. I figured what they were trying to go for, but it didn't quite get there.

Is it a good children's movie? Yes, I think they made something that kid's will like. Will it be memorable? For me, probably not so much.  For $5.00 dollars, it' wasn't terrible, just average.
Posted by Here, There be a Writer at 10:07 AM