So, I have been a little busy lately... 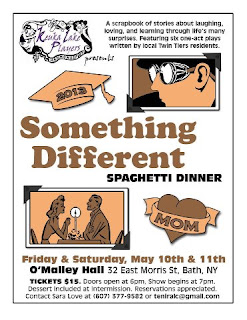 I didn't post back on Sunday and it's been almost 2 weeks since my last post. Feels weird! Truth is, I hate when I don't post. It's gotten to be regular, almost habit. I have been crazy busy with this "Something Different" Spaghetti Dinner Theatre, that is way there hadn't been a blog since almost 2 weeks ago.

See, I normally am busy with the various theatre productions I am involved in, but somehow this one turned into some different [ha! pun intended :-)]. Back in March, Keuka Lake Players had a script-writing contest for 1 acts (about 10 pages or less). I had one script from last year's 24 Hour Theatre (with KLP) that I wanted to submit, but I wanted to write another, try something different [this might happen throughout the blog, folks]. While my writer's for the Lake Country Player's 1st annually 24 Hour Theatre were writing, I started writing this new script, and while NOT written in 24 hours, it was written in about a weekend (give or take). These scripts got submitted and BOOM, both were chosen, out of 10 scripts 6 were selected. it was the most surreal thing ever to have my work chosen to be performed. I was pretty giddy about it, I will admit, in a bit of shock that my writing was good enough (as most writer's tend to be about their work).

Cut to auditions for "Something Different", I think the  more exciting part for me was hearing people read my scripts at auditions and seeing who was auditioning for the said parts than actually auditioning. I was also auditioning, but NOT for my own shows. I wasn't going to read for them anyway-those parts I didn't write for me, they were for others to play-which also happened to be the director's rules too.

This show, this "Something Different" was something different. There was going to be only 4 weeks, roughly of rehearsal time and low tech theatre as Sara calls it. That meant crunch time from the time of casting. not only had I been cast in 3 shows (one part had only 1 page of dialogue), but now I was stage managing the show too. It was a whirl wind month of rehearsal 3 days a week and lots of line prep work, props collecting, set organizing, and food planning (for the spaghetti dinner part).


The amazing part? The amazing part is that we have 6 awesome shows with 6 awesome casts that are going to perform tonight (5/10) and tomorrow night (5/11). They have made 6 different worlds that will be performed and am so proud of everyone.

It's a Mother's Day show that has comedy, drama, suspense, and of course Mothers too!

Some photos from rehearsal time at the Love's house. Don't worry, no spoilers here! If you are in the area today, Friday May 10th or Saturday May 11th, come to O'Malley Hall in Bath, NY for SOMETHING DIFFERENT! Tickets are 15.00. It'll be fun!!!