This week we are looking at old cartoons. Ah, the good old days of animation, classic animations: Looney Tunes, Merrie Melodies, Scooby-Doo, Hanna Barbera, then later came the likes of Thundercats, He-Man, and Voltron. Cartoons that I watch when I was a kid were kind of varied. I watched a number of cartoons during the 1980’s and early 90’s, but also there were many that were from the 60’s and 70’s. I was generally not picky when it came to cartoons, but naturally I leaned a bit for to the fantastical and silly. I like Scooby-Doo for the mystery, Tom and Jerry for the random silliness (the cat and mouse version, not these guys who were from the 30’s: Tom and Jerry, circa 1930's), or The Pink Panther simply because it was awesome to watch a cartoon that used no dialogue, that just had music and sound effects.

I want to explore the latter one more. Cartoons from the golden age of animations after the founders began animating, during the era that practically everyone knows, of Bugs and Daffy. How many people know the creative minds behind the Pink Panther also created many of the Dr. Seuss specials that aired on CBC and ABC in the 70’s and 80’s, or a cartoon of the Ape Planet movies called “The Return to the Planet of the Apes” (1975-1976)? 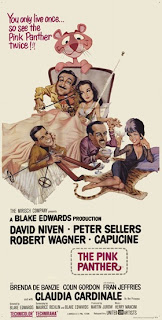 This week I will be looking and the works of DePatie and Freleng. After Warner Brothers Studios stopped making cartoons in the early 60’s, there were two gentlemen, David DePatie and Isadore (Friz) Freleng who took the studio and transformed it into a place of animation history. They took over the Warner Brothers studio in 1963 and with the use of the Warner Brothers equipment they created a number of wonderful and entertaining cartoons. The first job the studio took was to make an animated intro to the Pink Panther movies directed by Blake Edwards. The first being “The Pink Panther”, what David DePatie and Friz Freleng didn’t realize that because of this they would go onto produce animated intros for all of Edwards’ movies except two and then create 124 cartoons shorts (from 1964 to 1980), and have countless TV shows/specials on the lanky and debonair feline. There was also a comic book too (Gold Key Comics, not related to DFE) of the Pink Panther. They even won an Oscar for a Pink Panther, “The Pink Phink” in 1964 and nominated for another is 1967, “The Pink Blueprint”.

The surprising thing for me is that when I went looking for more information on the cartoons of DePatie-Freleng, I discovered almost two dozen unique original cartoons, both theatrical and TV series, that DePatie-Freleng Enterprises (DFE) put out. Some I remember with a vivid clarity, other a vague sense that I had seen them before, and others that were totally unfamiliar.

DFE (active from 1963 to 1985) was David DePatie who had been the LAST producer with Warner Brothers before the close and Friz Freleng an animator, cartoonist, director, and producer. With the rampant success of “The Pink Panther” movie, they were asked to create a cartoon series around the profound feline, after that then a cartoon based on Inspector Clouseau, “The Inspector”. There was also “Roland and Rattfink”, “The Ant and the Aardvark”, “Tijuana Toads”, “The Blue Racer”, “Hoot Kloot”, and “The Dogfather”; these cartoons were theatrically released. DFE also produced TV series and specials that ranged from new Looney Tunes/Merrie Melodies cartoons that Warner Brothers commissioned DFE to make also a few of their TV shows were “Misterjaw”, “Crazyleg Crane”, “The Super 6”, “Spider Woman” “Doctor Snuggles”, and “What’s New, Mr. Magoo”. DFE was certain not hurting for work during this time.

I am less familiar with DFE’s TV shows outside of “The Pink Panther Show” and “Doctor Snuggles”, but pleased to know that they had built a lucrative business throughout the 60’s, 70’s, and into the 80’s, which also included animation for commercials, one of the biggies being Charlie the Tuna for Starkist Tuna.

It definitely should be noted that most of the animators that worked with DePatie and Freleng were originally with Warner Brothers. This can be seen in a number of cartoons that either remind you of other characters or plots that felt recycled from Looney Tunes cartoons. The Tijuana Toads remind you of Speedy Gonzalez and characters associated with him. DFE made these new Looney Tunes/Merrie Melodies cartoons from 1964 to 1967, while producing Pink Panther and Inspector cartoons. DFE lasted until the early 80’s when they were sold to Marvel in 1981 was turned into Marvel Productions, Ltd. Maybe a precursor for things to come was when DFE produced a cartoon of Spider-Woman in 1979. 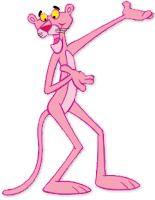 So, what are some of the things that draw me to these cartoons? Well, I was always amused that they could tell a story with no dialogue. That you could have a 6 minute story and not have the any of the character say a word, all that was there were was the music and some sound effects. It was great. Probably a reason that I love stories and quite possible a reason I got into writing, because with the written word you have no sound you have to be able to explain why something happen (Show, not Tell). You have to use your imagination. Of course one other reason is because of that snappy jazzy little tune by Henry Mancini only added to the fun. Oh and I mustn’t forget, HE WAS PANK! The Pink Panther was PANK! What little girl wouldn’t appeal to a giant pink kitty! Okay, that might be a stretch, but I did like pink a lot back in the day (we can discuss my fall out with the colour pink another time). I am not sure which was my first Pink cartoon, but there were 2 that I remember vividly: “Pickled Pink” and “Psychedelic Pink”. “Psychedelic Pink” is a mind trip to this day, but something about it just makes me happy.

Writer’s Note: Many of these cartoons use a laugh track. While I don’t condone the use of a laugh track, I do find it mildly distracting. “Psychedelic Pink" for example, it is trippy enough not to have disembodied laughter playing along side it.

I don’t really remember where I first saw these cartoons. When I was in middle/high school I used to watch the “Acme Hour” on the Cartoon Network and there were some Pink Panther cartoons along with “The Inspector” and “The Ant and the Aardvark” cartoons. Those were always favourites. There is just something about them. They are simple, classic. No long running story arks, just a simple story told for the enjoyment of telling stories that often included music.

I didn’t start watching the Pink Panther movies until I was much older. Something about, if my parents like them, I tended to not like them. Then, often years later, realizing that they really were awesome. I guess that’s a kid’s mentality though, if my parents like it, I won’t like it, because it’s boring. 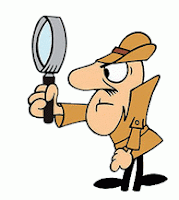 Animation wise many of the DFE theatrical cartoons were simplistic. The Pink Panther backgrounds were often ordinary, with exceptions being the “Psychedelic Pink” which had an abstract look to it. “The Ant and the Aardvark” had far more colouful backgrounds (almost real world feel), “Isle of Caprice”. What made them unique was that the characters were a singular bright colour; red for the Ant and blue for the Aardvark (he calls himself an anteater; even the cartoon calls him an aardvark). And “The Inspector” is done with black outline and one or two other colours, depending on where the scene was happening, “The DeGaulle Stone Operation” had green and blue at the police head quarters, while at the hotel the background was pink and orange. I think this style is what caught my eyes; I could pay attention to the main part of the cartoon without being too distracted by the background.

The other main point about these cartoons that I liked and still like is the use of music. From the opening title credits to the music interspersed throughout, I feel that was something that caught me attention as a child. Today, I am still very much into music and sounds that I get much pleasure when I watch these cartoons again. A reaffirmation of that feeling after I had gotten a DVD set of all the Pink Panther cartoons for Christmas a few years ago. As watched these cartoons again, I felt a glorious feeling of HAPPY that comes from the part of my brain that enjoys things of this caliber.

To note, you can get DVDs of all of “The Inspector” and “The Ant and the Aardvark” cartoons. Each DVD has all 17 episodes from each of the said series. For those collectors out there that is full of AWESOME. I have yet to find “Hoot Kloot”, “Roland and Ratfink," "The Dogfather", or any of the others on DVD or VHS tape. I did find one DVD of 14 episodes of “Tijuana Toads,” but it seems to be quite a bit rarer print.

The good news, I discovered that yidio.com has Tijuana Toads, Roland and Ratfink, Hoot Kloot for free (in high quality). You can also find episodes of all, these on YouTube.

Writer’s Note: Yidio is a free site. There is quite a bit available on the free part. You can link Netflix, Hulu, Amazon Instant Video, and ITunes accounts to watch other shows not included in the free shows.
Posted by Here, There be a Writer at 10:41 AM