Since I have posted about my old mix tape from college, I have purchased a package on 5 audio cassettes from Wal-greens (yes you can still get them in SOME stores). This was for Amy's 2013 mix tape. She sent me my and did a FANTASTIC job on it (pictures to follow). On the first listen, I love it!! Lots of new stuff, some older choice cuts, and a few weird surprises. Imagine Flash Beagle on a mix tape! That's Awesome!!

I thought I would give you an idea of what I chose for her tape. It was dubbed "The Allons-Y Tape" after both of our deep love for all things Whovian. It's a unique mix, with some old familiar tracks and some new stuff. My music knowledge has increased significantly in the last decade so I had quite a collection to choose from. It was quite afternoon project.

So, without further adieu, "The Allons-Y Tape". 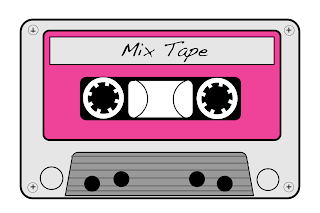 Side A:
Annie Lennox - Why
The most lovely Annie Lennox song I have ever heard. It sounds like water flowing. Not to be super lyrical, but when I hear this song I feel like I am swimming in a gently flowing river.

Dar Williams - The Light and the Sea
This song I imagine to go with the character of Aven in "The Chronicles of the Imaginarium Geographica" by James A. Owen. An amazing YA series that is well written and you feel more literate after reading any of the books.

Meatloaf - Not a Dry Eye in the House
I have never know Meatloaf to not have passion, but there is something truly heartbreaking in this song. It gets me every time.

She and Him - In The Sun
I was introduced to this song via a good friend, because the video featured a number of different dance styles (he was and still is big on dancing, ballroom style and what not). I was a big Zooey fan, so I took a gander and was wonderfully surprised.

Paul Simon - Kodachrome
I only recently discovered this gem from Paul Simon. I listen to a classic oldies station that LOVES to play this song. Something about the use of old camera film as the subject of the song appealed to me.

Sophie Madeleine - The Rhythm You Started
I first heard Sophie in the musical comedy duo Rocky and Balls. When I realized that she also does her own stuff, I was hooked. This being my favourite tracks hands down. Did you know this lady has a Master Degree?

B-52's - Song for a Future Generation
It makes no sense, but is REALLY FREAKIN' catchy!

Rockapella - Shambala
I grew up knowing about Rockapella, but only because they were the resident group on the kid's game show, "Where in the World is Carmen Sandiego?" I bought the "Don't Tell Me You Do" album and then later "Smilin'" which is the one that features "Shambala" and "Here Comes the Sun."

Abba - Take a Chance On Me
I had a hard time choosing an ABBA song, as I have too many favourites to mention. I didn't want to just use DAncing Queen, even though it is a good song on it's own. "Take a Chance on Me" is just plain catchy and it (in my opinion) more likely to get passed over. So, I included it on the mix tape.

Sean McCann - Simple Song (I saw this performance)
Not only is it catchy, but the link I provided is from the actually concert I saw and where I got to meet Sean McCann and get a lesson in Bodhran playing. He is a really sweet guy!

Electric Light Orchestra - Strange Magic
My dad introduced my to ELO, partly because I played violin in school. I went through a big classical/violin phase in high school. I find the ELO dynamics just delightful. It's different and I tend to like different.

Pern - Song for Petiron
A sequel to the first Pern CD done by Mike Freeman and Tania Opland. The songs were written by Anne McCaffrey and they created the music, expect when the song was already an instrumental piece and Mike and Tania created the song from scratch.

Side B:
Elton John - Goodbye Yellow Brick Road
Probably, no definitely my favourite Elton songs. It's very literary, but not in the direct OZ type way.The imagery, mixed with the piano, and the emotion behind it. Feels like an old book that you have read time and time again.

Susan Werner - Petaluma Afternoons
Something about this woman voiced so so sexy and rough!

Hannah-Rei - Upside Down
My friend Hannah, the other half of Rocky and Balls, also writes and performs her own stuff. I have had the pleasure of watching this song grow as she rehearsed, performed, and recorded the track for her FIRST full length album. Check out her stuff, Hannah-Rei!

Crowded House - Weather With You
Another case of the imagery just just so lovely, that it became the standard favourite.

Great Big Sea - Sea of No Cares (Living Room Version)
I prefer the slower, melodic version of this song. The album version was far too produced. When they stripped it down, the true meaning of the song is more obvious.

Blackmore's Night - Rainbow Blues
Originally a Jethro Tull song. Not familiar with Jethro Tull, but I like what Ritchie and Candice have done here.

America - Horse with No Name
First heard this on the "Freedom Rock" tape set while riding with my Dad in his Dodge Daytona through the hills of Chautauqua County.

Phantom of the Opera - Music of the Night
I got to see this musical 3 times. Got to perform this on violin in high school. Always wanted to sing it. Simply beautiful.

Amazing Grace
I love any version of this song, but for this tape I used a bagpipe version.

It's nice blend of my current favourite tunes and some regular classics. Hope you enjoy my little wander through my musical collections. Go check out some of this artists! There are so really amazing things amongst the selected artist/performers.

Nothing major else to post. Expect the regular Sunday post on Sunday :-). Later, Dear Readers!!
Posted by Here, There be a Writer at 9:11 PM