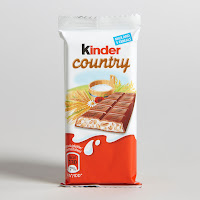 Tonight, as I walked the aisles of Wegman's with some friends after an evening of Illuminati: the Conspiracy and conversation, looking for dinner. I settled on a Chicken Pesto Sammich and Cranberry Splash Sierra Mist (and splash I did, all over me when I opened the bottle). We are a strange lot, wandering Wegman's on a Saturday Night. I was craving chocolate bad! Now, one of my favourite parts of Wegman's (i have a dozen favourite, by the way) is that they have quite the choice of chocolate available for consumer consumption. But what to choose? Hmmmm....I have a wide range of chocolate that I enjoy that ranges from Lindt, Black and Green, and Kinder Chocolate-of course I also include Dove, Skinny Cow, or Nestle.


Tonight was a definitely a Kinder Chocolate night!

What exactly is Kinder? Well, it's an Italian Company that makes all sort of chocolatey goodness, some of which you have probably heard of already: Ferrero Rocher, Nutella, and even Tic Tacs (did not know about that one), but these are not the only products out there.

One day, some months ago, David and I were walking through the International Foods aisle. I spied some chocolate. I was hankering for some thing sweet and I figured-why not just pick something different and try them. As an avid fan of Brad Jones' work (Brade Tries..., Cinema Snob, 80's Dan), David and I thought it would be fun to just try something new. Well, I happened upon 3 yummy treats and tonight I decided to fill my choco cravings with the same 3 Kinder Chocolate treats, as I enjoyed them before.

All 3 are quite tasty, but I have my favourites. After a second try, the ranks go as followed: #3 Delice, #2 Country, and #1 Bueno.

Bueno is is a hazel cream filled "trix" like bar. It it light and kinda of fluffy. Since I have a love affair with Nutella already, this is kind of the obvious choice. Now, Country reminds me of a Nestle Crunch bar with crispy rice, with the difference of white chocolate being on the inside, covered by milk chocolate. Finally Delice is basically a chocolate cake brownie thing and milky frosting covered in chocolate. It's kind of ordinary, but still very edible. I was not as excited as the last time, so it gets bumped to last place. Sorry Delice!

Ferrero is also the maker of the Kinder Surprise Egg, which is a hollow chocolate egg (milk chocolate on the outside, white chocolate on the inside, and a toy inside. While hugely popular in Europe/UK, they are currently banned in the US. Why? Not sure. Probably someone thought that American Children were stupid and would choke on the toy when trying to eat the chocolate egg.Kind of silly, but what can you do? 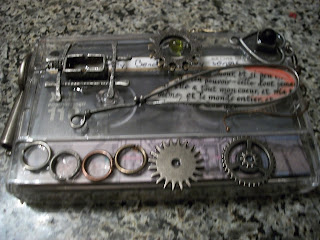 Mix tapes are awesome in their own rite and they are especially awesome when you get one in the mail from one of your best friends from college. I blogged previously about one of my old college mix tapes made by the same friend. Now what you see (to the left) is the volume two of the same said mix tape. Behold the awesomeness of it! When I pulled it from the package, I was surprised by what I saw. Amy had called it a work of art.

Indeed! It is a work of wonderful art! It is kind of Steam Punk and Whovian blended together, with a bit of Steam Powered Giraffe thrown in. 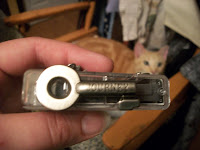 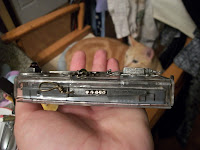 The track list features a number of artists that are completely new to me and some tracks that I am familiar with, but did not previously have in audio format.

The bulk of the tapes includes the likes of Amanda Palmer and Neil Gaiman, actually 6 tracks. 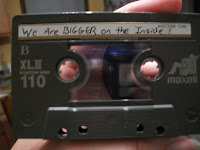 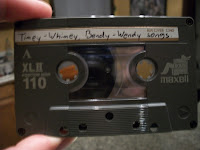 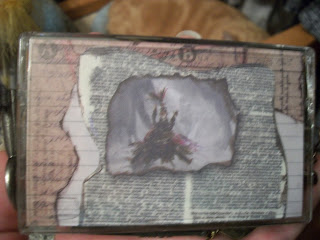 Some of the tracks include Dolly Parton, Sarah Slean (whom I have seen in concert, opening for Moxy Fruvous once), Susan Werner, The Puppini Sisters, and Alicia Keyes. These are artists I am familiar with even if I might not have heard the songs before.

But there are a number of unknown/never-heard-of-before artists that I get to experience first hand and fresh, without a biased opinion: Bitter Ruin, Simple Pleasures, Wilco, Stump, Blur, and Biffy Clyro. Some really strange names, I will admit. I get a lot of people saying, "Oh you should listen to So-and-So, and the Such-and Suchs", but rarely do I take the time now-a-days follow through on the suggestion. I just don;t always have the time to devote.

In college there were many an artist that I added to my collection because of friends mix tapes or just hanging out in there dorm room listening to music. There was always time. In fact, that is how I acquired the eclectic collection I have. It has been a long time since I have added an artist on someone's suggestion, certainly nothing major since college. I don't normally hang out in dorm rooms anymore. This mix tape gives me the chance to experience the newness of these artists at my own pace, without feeling obligated. Besides, Amy has really good taste in music and she hasn't steered me wrong before. She did get me to NOT hate U2. :-) 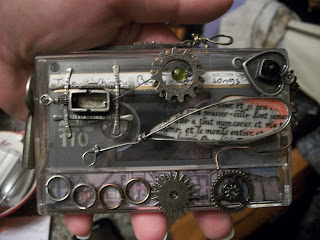 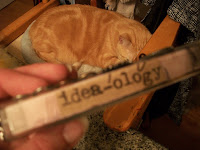 Mix tapes are, in many way like a declaration of your IDEOLOGIES. I think it is very fitting that Amy named her mix tape, volume 2, Ideology.


I have been rehearsing from "The Best Little Whorehouse in Texas" (since July) with Elmira Little Theatre all week and having a blast (rehearsals are getting intense as we open in 3 weeks). The pieces have started to fall into place. Got to see the Aggies work on their number this week. I caught the tallest Aggie standing on the bench during rehearsal and now he looks like a glowing angel ~giggle~. It was funny because as the Aggies were getting ready to rehearse, all of the whores/ladies rushed to the front to watch. It was like something out of a chick flick with all the squeeing and giggling! I have a turbo dance rehearsal today at 2. Another busy day in the life if this writer! More to follow, with pictures and such...stay tuned. 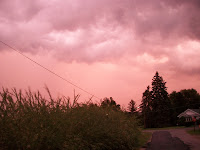 I leave you with some awesome cloudage from last week. We had an impending thunderstorm at sunset and the colour of the sky was such a lovely a shade of salmon and violet (depending on the part of the sky you were looking at). While I was taking pictures you could hear the rumblings of thunder and flashes of lightening. It was brilliant.

I get terribly charged when there's a thunderstorm, in a good way. Often I get really hyper. There is something about the freshness that comes with rain. Not only that but have you ever really smelled the air before, during, and after a rain/thunderstorm? Probably one of my favourite smells ever, after chocolate or the smell of a new book. The world smells new, clean. 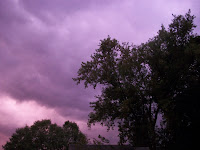 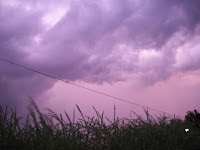 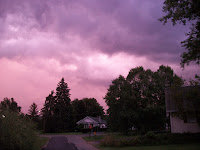 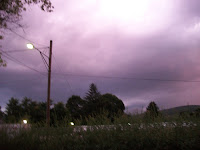 When the fog descends
downward from the hills.
I come alive
as the twilight un-furrows
it's shadows.
In the folds of my couch
I can see the fog's path
coming near.
Here my cats
playing amoungst the
houseplants
as the night world comes alive.

I can smell the storm
that brings this fog
unto my door
this night.
Is it merry mischief sprites,
they clown with my fears
upon this night.

I am well aware
that tonight
the fogs grows dense.
My mind is tense,
my stomach,
it clenches.
The hollowing wind
raises my hackles.

Will it pass?
or will it stay?
The cats
are alert and ready.
The growing storm worsening
and my own hunger threatens
my ears,
in a growl so low
that the cats hiss back at my
cozy abode folded into the couch.

There is only one thing to stop
this madness,
as I recall,
there is leftover KFC in the fridge
and my hunger shall abate,
at last.