I had a stage crew gig this weekend and was overly busy in general. It happens. Been thinking of ideas for this blog, such as reviews to do in the future, or topics of interest to the internet public. I still want to review "The Golden Compass", both the movie and book, but I need to time re-read the book again (and as I am still reading the "Inheritance Cycle", it'll be a bit before I get to that). I have another super secret review that I am planning, but it's also not ready. I think all y'all will enjoy it, but it's so secret, so don't ask! ~wink~ It's some GOOD trouble, as my Mentor is often fond of saying. I like that phrase. I also want to interview a couple of people and feature some of their stuff on "Here, There be a Writer". These are also in the works. So, what does that leave to feature today? 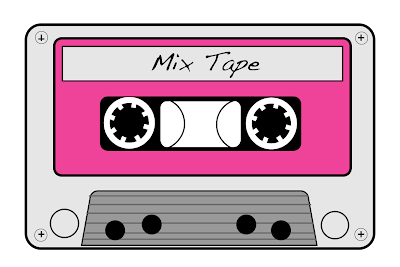 A number of ideas spring from a a single source have exploded in my brain lately. About a week ago friends-Amy and Richard-came down to visit (they live in Rochester) and one of the many topics discussed while during this said visit was our love of our old mix tapes. After all, we (the four of us) grew up in the era of cassette tapes and often this only way to get/discover new music when you were a poor college student; was to trade mix tapes with your friends. Of course this also goes for collecting concert tapes and rare tracks, something my husband was ever so fond of doing in the 1990's (still does actually, just different format). The CD burner had yet to come out, or was so new that it cost close to 200 dollars to purchase. Yeah, Chitlins, your parents, aunts and uncles used to not be able to burn a copy of their favourite band new album for their friends. We had to listen to the radio (gah!), or cassette tapes. Most of us had only the radio and whatever cassette tapes  we had lying around (sometimes record albums, although they hadn't made the come back yet). This was part of the reason, no doubt, how mix tape were born, because when you were bored you would make the mix tape and not be bored (at least that how it was for me). Often I had more fun making the mix tape, especially if it was for someone else.

This was the age of the late 90's, when you would hook your computer to your boombox (is that ever the right term now-a-days?) to record mp3's that you had gotten from Napster, Audio-galaxy, Scour, or Morpheus so you could record digital media onto cassettes. I used this method quite a bit, that and the CD to tape method to create my mix tapes; sometimes I would use tape to tape, if I could borrow my parents dual tape deck player, that is (mine had only one tape deck).

I made mix tapes not only for my friends, but also for myself. There is a kind of magic in popping in a mix tape and listening to the often eclectic track list boasted on most of these tapes, singing along, usually to the dismay of your suite mates or siblings (no one really cared). Songs that you grew up with, or that friends introduced you to and then they became your favourites, or those guilty pleasure songs (you know which ones).

In this modern age when most music is digital and  cassette tapes are hard to find anywhere, I like to harken back to my own cassette tape collection. It doesn't get a lot of use much lately, but I find comfort in listening to these very same tapes from late high school through college. I even brought one such mix tape into the 21st century and made a CD version of the track list. The tape which has been a crucial part of my car driving experience in the post college years. It is feeling the years and may not last much longer. I made this conversion in order to save the history of this particular tape. While the old tape still works-and it'll probably last until the cassette breaks or implodes, whichever comes first-I wanted to remember the awesome time and good feelings it sparks in my soul.

Featuring the track list from this famous mix tape that is lovingly dubbed, "Amy's College Mix", is a collection of tracks from my friend Amy. Because of her, I now know these song so completely that I think they are knitted into my DNA now. It also brings back a bit of nostalgia for me, "Well darkness has a hunger that's insatiable/And lightness has a call that's hard to hear..." from the depths of the boring real world, I have a little ray of hope and sunshine calling to me to sing along. From this tape I learned to love Great Big Sea, I discovered the musical-Scarlet Pimpernel, understood what RENT meant, hated U2 a little less, understood Amy a bit better, learned that the Indigo Girls had other songs out there that weren't "Closer to Fine", and discovered some new/new to me artists. 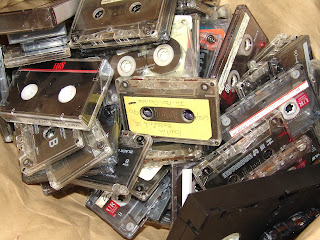 This brings up the point that I wanted to make. I want to make a new mix tape for Amy (as she herself said there was a volume 2 in the works of the above mentioned mix tape). Well, if she makes me a new one, then I will make her a new mix tape (using actual cassette tapes too) of my current favourite songs/new stuff that I think she would like. What to look for? Maybe some Annie Lennox, She and Him, Celtic Woman, maybe a little Great Big Sea, Bare Naked Ladies, or even some of Hannah-Rei and Sophie Madeleine (two very talented British Lassies), might even put some Paul Simon or Indigo Girls (but different tracks on this one).

Question Time: Has anyone made a mix tape before? If so, then what have you included? What would you put on a mix tape? Comment below, in the Comment Section....
Posted by Here, There be a Writer at 8:21 PM