Thoughts on The Muppets. What now?!?!

I've been going around and around what to write about this. I didn't want to rant or whine about The Muppets cancellation. It is true that I was bummed when I saw the headlines, and even more bummed as time passed, but there's more to it. 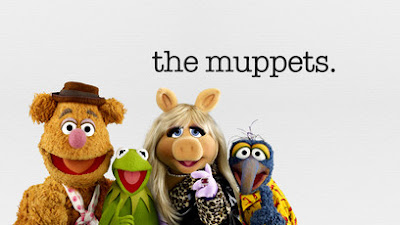 It was exciting to see the Muppets in prime-time. Now Muppet fan are left disappointed, confused, and  feeling like there might never be Muppet based show in prime-time, after all Muppets Tonight was also only ran 10 episodes (season 1) and later all 22 on Disney (season 2) in the late 90's. And then there was The Jim Henson Hour in 1989 where only 9 out of 12 episodes aired. There were some who were hoping that The Muppets would break the prime-time curse and go a second season. This is why many Muppet fans were sadden by the cancellation, including me. For my part I was just happy to see the Muppets being funny and relevant again.

See, Dear Readers, I can be sad that the ABC Network chose not to renew The Muppets, leaving us with a muppet-less prime time, but I can also think about the possibilities for the Muppets in the future. There will more opportunities I am sure of it, maybe a movie or more internet based Muppets via YouTube. I want to focus on the positive.

First, I can say that if Jim Henson was still alive he would have loved the new show. He always talked (in his biography by Brian Jay Jones) that he wanted the Muppets to be for adults. He didn't want to be labeled as children's performer. As an experimental film maker and comedic genius with puppets Jim was always thinking outside the box. I thinks that's a good sign that the show would have worked. Also, after thoughtful repose, I think that to trust that only one season is a mark of a show is rather lofty ideals from ABC. Did you know, Dear Readers, that in the first season of The Muppet Show, Bernie Brillstein, Jim's agent, he asked favours of friends for the first few guest stars.

Not all great shows, actors, concepts are breakout hits.

Now this leaves Muppet fans a little disillusioned about what will be next for a favourite monster, frogs, bears, pigs, and whatevers. There are those, at least from those I have talked to about The Muppets cancellation, who didn't like the show. It wasn't their flavour, or not kid -friendly enough, or even they weren't that into the Muppets. While others are sitting on their beds, sofa, and dinner room tables wondering how could the Muppets not succeed. I will always wonder myself. Wondering if Netflix would consider picking them up (Thanks Tough Pigs for the suggestion. *Hint Hint Netflix*), of course I wonder at the fate of the Muppets too. Being owned by Disney, think about this, Dear Readers, if Disney can bring back the Star Wars franchise from the brink, then maybe Disney can work magic with Kermit, Piggy, Gonzo, Pepe, and Uncle Deadly.

Until then, consider that maybe Uncle Deadly is still out there with little Gloria Estefan and Sam the Eagle is trying to woo Janice (yeah, that is a thing you can't unsee). So, I will leave this right here....palate cleanser....