Soon the new Monkees album will be officially released. Already there are four tracks circulating from She Makes Me Laugh, You Bring Summer, Me and Magdelena, and recently Whatever's Right. This is exciting for fans, a BRAND NEW Monkees album coming out. 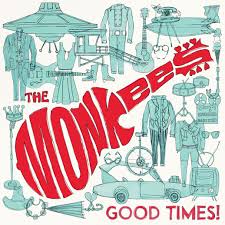 Do you know have exciting this is?

Okay, yes I am a Monkees fan, and yes, I am looking forward to the new album. How did you guess?

Good Times! is the name of the new album releases May 27th. You can pre-order it on amazon and the mp3's are available on Amazon and iTunes.

Why, Dear Readers, should you consider this album then? Well, because if you are a Monkees fan it will feel like a Monkees album, but it will also be a unique collaboration of old and new. Truthfully, am not as familiar with the newer albums like Justus (You and I) and Pool It! (Every Step of the Way and Heart and Soul). I was introduced to just the hits from the 80's and 90's era, and of course the classics like Last Train to Clarkville and Daydream Believer. Good Times! is something reminiscent of their sound from the 60's. It is refreshing to hear Monkees song channeling the era whence they were spawned, and not trying to sound like there are modern or too from the 80's or 90's.

The Monkees who have been around for 50 years have recently resurfaced when the three surviving members joined up in 2012 for A Evening with the Monkees an intimate tour with wild Jimmy Choo. shoes on Mike and played all of the songs from Head (having a recording of Davy being accompianed by the band. I got to see them on that tour with four my closest friends. Twas a good time and I saw Peter dancing in leather pants to Your Auntie Grezelda. ~giggle~

Something exciting about Good Times! is that a few of the the songs were written by modern artists, Rivers Cuomo of Weezer fame wrote the first track to be released, She Makes Me Laugh. Other featured writers Ben Giddard (Death Cab for Cutie) on Me and Magdalena, Noel Gallaghar and Paul Weller (Oasis) on Birth of a Accidental Hipster, sung Mike and some Mickey, Andy Partridge (XTC) on You Bring The Summer, along with tracks from Boyce and Hart on Whatever's Right, and Goffen and King on Wasn't Born to Follow, sung by Peter Tork, the staple of Monkee songwriting in the 60's. It's a real throw back with these songs.

"The most genuinely Monkee-sounding music they've made since they broke up, really. They're not trying to be an eighties band like with Pool It, or a grunge band like with Justus. The guys are working with a team of people who care about that vintage sound (writers from Weezer, Oasis, and Fountains of Wayne), and it shows."
~David A. Scott, creator of the Monkee Mash and the Literal Video Version of Daydream Believer

Of the tracks released on Amazon and iTunes my favourite is Me and Magdalena. A Mike Nesmith track, it feel like a Nez track, smooth and mellow. It's very Zen like. I have always love the way Mike's sings and gets lost in and I loved it after the first listen. I have become fond of Nez's soft and lilting vocals and I think it will continue to be a favourite. I cannot forget She Makes Me Laugh, its a Mickey track and Mickey is my favourite Monkee and I can almost picture it playing during an episode, or at the end. Better than Star Collector any day. Sorry, Star Collector isn't my favourite Monkee song, in fact it was over played during the show's run. I know its a regular on the show, but it was jarring and sync heavy. Anyway, that is NOT why we are here. The four tracks all have a charm, a resonance of the pure Monkees that hasn't been heard since Head (so folks say). I think its a fun album and cannot wait for next week's release.

For a more detail review check out this REVIEW.