The Story of The Thing They Made

So, I receive a piece of sloth mail from a fellow Amanda Palmer fan yesterday. This was right before I was to head to the one-time performance of Here Come Snoopy Claus. It is a show that was created and birthed within two weeks. David, Kaylara, Sara, and myself came together to write and direct a show based on the Peanuts characters and with the help of Anna, Ryan, Lily, Amanda, and some adorable Woodstocks (Wendy, Tess, Daphne, Owen, Aubrey) we made a thing, a thing that never existed before.

I am forgetting that this sloth mail I received suggested I do something CRAZY. To tell a story. 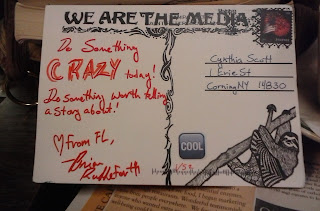 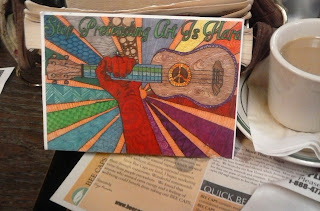 I thought that doing Here Comes Snoopy Claus was pretty crazy and then I thought, maybe I should write a story about it. I tried something different. It is a bit of a rough draft, but here is my thing of the thing that was made and performed yesterday.

Once upon a time there were four souls. They would spend their days creating stories for the world which they inhabited. These souls were storytellers. Each telling their own stories, in their own ways for the good of the world.

But today they came together to make something.

Their world was a place filled with strife and sadness, but these souls were beings that love to make art and beauty and love.

So one day, these souls met in a not-so-secret place and discussed the making of a thing. Something never made before. This was a thing that would bring much joy to the world.

They talked and planned.

The souls would throw ideas against the walls of these not-so-secret place. It was a grand time. Sometimes the idea balls would stick, others exploded, and still others bounced back and the souls had to duck to avoid the flying idea balls.

They did this for the longest time, about two days, until they finally had on outline of the thing.

The souls were very excited. They told others whom wanted to take part in this thing.

Over the next several days these souls met and worked separately on this thing. They brought in other friends to help built this thing that was filled with art, songs, happiness, comedy, and love. There was guitar music and karaoke echoing across the not quite frozen lands of the soul's world. They were surprised, because it was the bleak wintertide and usually that meant cold. But it wasn't cold this year, but warmth and much still green.

So, the souls continued to practice their art until the grand day of unveiling to the world.

Meanwhile there was sadness, when one of the souls-the oldest became ill. They souls worried as they practiced. But fear not, this story is not sad. For the old soul sought help in healing and the other souls sojourned on. They-the souls vowed to honour their friend while he was healing.

And then the day was upon them.

The souls rejoiced. The main four danced and sang with their friends. The  souls of the world that lived near and far came to see with what they had created. There were lessons learned and joy to be shared, which is all the souls really wanted, and what everyone else enjoyed.

The souls they sang! Their thing brought much joy to the world.

And at the end of the day, the souls climbed upon the backs of reindeer and llamas and flew away into the night to eat chicken tenders and honey mustard.