RENT (the Movie): A Short Review 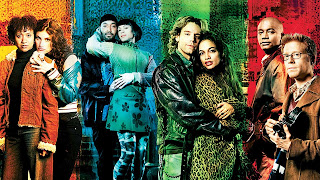 I have never seen a live production of RENT.

I remember in college, freshman year, when the halls of my dorm echoed with La Vie Boheme. I knew NOTHING about the show it was from, except that everyone was singing it.

This is also fact.

In 1999 or there about one of my bestest friends made me a mix tape that included this song about RENT. What?

Sometime ago I purchased a CD of the show RENT, vowing I would at least listen to the music.

Truth, but I only listened to it once.

Okay, Dear Readers, you are probably asking yourself what is the point to this post. Plenty. See, I don't post anything on my blog that isn't about something I haven't encountered or experienced. If I haven't seen something I will tell you thusly and it will only be a brief passing statement on blog post X, Y, or Z. I will never string you along about anything, when I mention something, there is a propose. What I am trying to say is that after a decade or so, I have finally seen a version of RENT.

Now, I know you might be thinking does she mean the musical or the movie?

It was the movie. And before any of you jump up fretting about movie versus music, please see my review of Charlotte's Web (features the animated movie, the live action movie, the book, and the musical). I want you to know that I will watch a theatrical production (even if I have to buy a DVD of it first) of RENT in the future. Over the years I have heard a number of things about RENT the musical, RENT the movie, RENT this RENT that....so, yes I watched the movie. And no, I didn't hate it.

Believe me I knew next to nothing about the characters, maybe a vague description about who was who and knew about five of the songs well enough. And yet I enjoy watching the WHOLE movie.

While it does kind of throw you into the world of NYC struggling artists and their messy lives, you do feel like getting punched in the feels. In a good way of course. OH THE FEELS!!! The acting, from what I can see, was good. I felt vested in these characters while I watched. Musically, I could enjoy all the songs, even got context on some of the songs that I didn't know before.

Some have told me that maybe it wasn't like the musical, but for a movie it was entertaining, touching, had a lot of musical moments, and I was entertained. I have a question to you, Dear Readers, have you watched the movie or the musical? What do you prefer? Leave me some love below...

If you were to ask me, Dear Readers, I could have to say the Mark is my favourite character. I could understand him and sympathize his arc. But, musically, I loved Mimi and Roger's songs, Light My Candle and I Should Tell You. As a whole the story is touching and give a real feel to this mismatched set of characters and their lives.

It was weird to not hear the standard dialogue that is featured in the musical version of the song RENT. But I think that was a directorial choice.

Note: it was nice to see Rosario Dawson in a musical role.

Overall, it was a decent movie, even go so far as to say a touching movie. It makes me curious to see a live production of it in the future.
Posted by Here, There be a Writer at 8:53 PM