Relevation on Writing and Faeries

Funny how the title about this entry is more in line with my previous entry, than what I am featuring here. I suppose I could switch them, but it all honesty I rather fancy the strange dichotomy of the naming. In the naming of thing one could go with the easiest name, but sometimes there is a deeper meaning.

Last weekend I got to travel with one of my best friends, Laura. we had been through quite a lot. She met me when I was an obnoxious high school kid and has stuck with me. We have been through distanced of thousands of miles and different states, states of confusion, Great Big Sea concerts, Niagara Falls adventures, and countless others memories. This time we traveled from Corning, NY (Where I live. She lives in the Buffalo area) to Hunt Valley, MD (in a town called Cockeysville) to FaerieCon East. 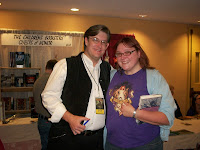 For having never been to a convention I think I handled myself well, although I was geeking out like a kid in a candy store (see picture below). I costumes were a site to behold everything from a Giant with a Giant Faerie Smooshing Hammer, a Unicorn, a Confederate Biker Faerie, an Irish Goth Faerie to name a few. Next year I WILL TOTALLY be dressing up! The art, creativity, and fun was amazing, felt very much at home. If I had more money to blow all the neat things I found for myself or family, I would walk away broke :-).

The best part was meeting James Owen, the fantastic author of the Imaginarium Geographica books and the inspirational book,"Drawing out the Dragons". I got to talk with him and bring him homemade birthday cards and some cheesecake for his birthday. I also got the chance to tell him what he means to me. Since 2011, when I read DotD, I have been inspired by James's words. Because of him I have a greater conviction to become the writer I am always wanted to be. He was the one to help me see what was right in front of him and give me a huge boost of confidence to go out and get it. He has taught me that you always have the chance to make new and better choices. I was also able to get the final book in the "Chronicles of the Imaginarium Geographica" series, "The First Dragon", I even got it signed and sketched it. 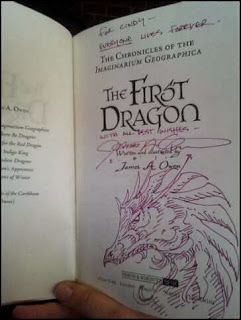 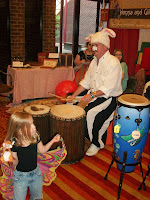 I saw James's presentation on "Drawing out the Dragons" and helped him by being his easel (this was a big honour). It was a McGuyvering type of weekend according to James. We also enjoyed a panel of authors talking about the Magic of Story (Melissa Marr, James Owen, Kelly Link, and Laura Amy Schlitz). Hearing other authors talk about things I have felt and wondered about. It makes me feel connected to a whole new group of people. The best part, well one of the best parts. There were A LOT of best parts. I got two books from two new authors to read. It's always exciting to discover new authors. I am sometimes picky about what books I start to read, or I just start buying all the books. (Half priced book stores are dangerous for me).

After the Con, we had been there from about 12 to about 7, it was time for doof (what I call food at non-food times). This proved to be trickier as EVERYONE was out getting dinner and we were both pooped and starving. After a bit of driving around, we found a little place called SALSA GRILL. It didn't look like much from the front. It was in a strip mall and there didn't seem to have much seating, until we walked in and saw the back dining room. Oh, and the food was a treat too. The bulk of the restaurant seem to be based on Mexican cuisine, but a number of the dishes were Chinese or Italian fused with Mexican. I got a Chicken Stir Fry and it was super delicious. Imagine stir fry with Spanish rice, Mexican seasoning, and a whole slew of veggies that wouldn't normally get included in the standard stir fry.

Sunday, we drove to Baltimore's inner harbour and walked around in the sunshine and had brunch at Lenny's Delicatessen where I had my first taste of Lox and Cream Cheese on a bagel (with lettuce, tomato, and onions). It was the perfect end to a fantastic weekend. We saw a WTC monument outside of the World Trade Center Baltimore Building and the U.S.S. Constellation.  Check out the photos below: 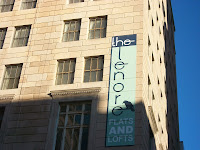 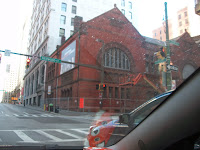 Some shots of neat building in downtown Baltimore. Sunday mornings are wonderful when driving through a city as big as Baltimore and as full of life as to see it wake up and get it's morning at Panera. 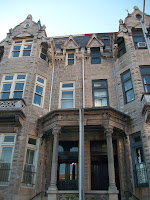 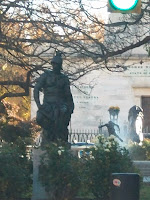 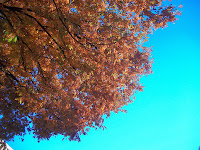 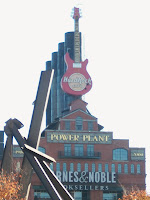 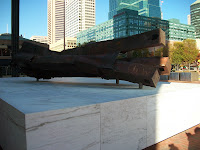 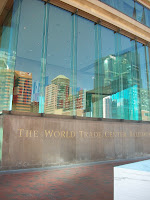 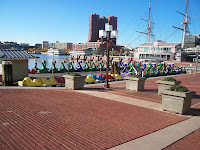 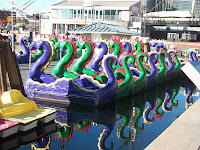 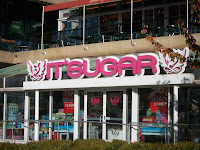 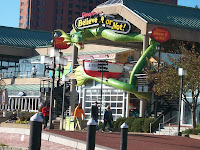 The actual name of a Candy Store in downtown Baltimore. There were giant boxes of nerds and a HUGE Lick-A-Stick! (okay you people with filthy minds) 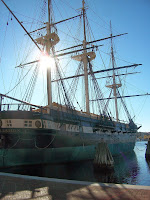 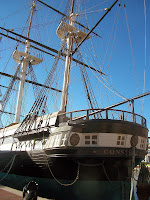 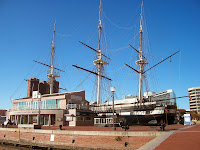 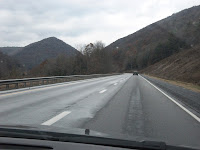 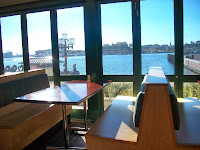 The Sexy Ship, the U.S.S Constellation and the view out of Lenny's Deli about 9:00 am. The the trek homeward through central Pennsylvania.