Thoughts on Many Waters..... 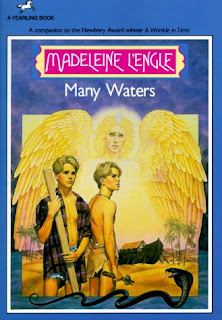 "Many Water cannot Quench Love, Neither can the Floods Drown it"

Sometimes when I read a book, I don't always understand why I like it. I love to read  A LOT! I love fantasy (and some sci-fi) (James Owen, Anne McCaffrey, or Douglas Adams), mysteries (Sue Grafton or Ellis Peters),and sometimes the occasional straight fiction like the "The Reader" or "Revolutionary Road". I am fond of poetry and Shakespeare and the Meditation's Trilogy (also James Owen), oh and I LOVE young adult fiction like Roald Dahl, L. Frank Baum, and Madeleine L'Engle. I have just finished the "Time Quartet" series, and I thought I would reflect a bit about on one of the books, Many Waters.

Many Waters is a side story about the 2 Murry brothers, Sandy and Dennys (what a weird way to spell Dennys). It's a story about how they end up in Pre-Flood desert with Noah and his family. It's an interesting spin on the Flood Story and I thoroughly enjoyed the whole thing. Now this is the 2nd reading of Many Waters. I noticed a few things.

1. It's not really depicted as a Christian story. It's based on the story of the flood, but it's not really presented as a flood story. Noah isn't even named until about halfway through the book. You definitely feel like that where the story is set up in, but it's not blatantly presented, unless you are really familiar with some of the names (which I wasn't). I picked it up quicker because I read a number of bible stories in one of my literature classes in college. The story is written about the characters, the people, and there lives in that world. The flood in just a background point in the story and it doesn't really happen as  Sandy and Dennys get to go home right as the rains start to fall.

2. The writing is stellar. I never really felt like I was reading a YA (young adult) book. On the flip side I felt that it wasn't being written too thick either. It was a really nice blend of heavy subjects and simple and lovely concepts rolled together.

3. And I think this point is relevant because of Boston. That even when really bad things happen, there are some many good things also happen. Bad things happen to good people, "Whenever there's an earthquake, on a terrible fire, or a typhoon, or whatever, everybody get it. Good people get kill as well as the bad." but those bad things and bad people should NEVER outweigh the good in a person mind.  "There have been many last days...and they mark not only ending but beginnings." Beginnings! That right people, beginnings are just the start of another story. Sometime things have to end to begin elsewhere.Out of the bad, a many good things and people come together to help, "Many Waters cannot Quench Love, Neither can the Floods Drown it". It took me a while to realize where these lines come from , but it's the Song of Solomon. 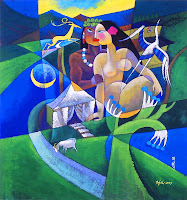 New American Standard Bible (©1995)
Many waters cannot quench love,
Nor will rivers overflow it;
If a man were to give all the riches of his house for love,
It would be utterly despised.

King James Bible (Cambridge Ed.)
Many waters cannot quench love,
neither can the floods drown it:
if a man would give all the substance of his house for love,
it would utterly be contemned.

Many Waters is probably one of my favourite stories now, both from the literature perspective and the moral lessons stand point. I have a greater respect for the stories of the Bible. It's good to know that college was useful after all :-). I read a number of biblical stories in "Bible as Literature" and The Psalms and the Song of Solomon were and still are some of my favourites, probably because I am a poet at heart.

Also, I have to point out the the "Time Quartet" is so beautifully crafted with it's blend of science, fantasy, and Biblical stories and poetry. There's a duality with the fantasy and faith, something that isn't easily done in literature, but here is works and it works well. Imagine Unicorns, Gryphons, Manticores, and Mammoths in the pre-civilazation world of desert shepards and the like. I recommend this book, or any of Madeleine L'Engles books to anyone who likes a good fantasy with a bit of science and doesn't mind the use a bit of faith as a back drop for the plot. Then check it out.

I leave you with some word, some VERY beautiful words; one more version, I think I like this wording  best:

Many waters cannot quench love;
rivers cannot sweep it away.
If one were to give
all the wealth of one’s house for love,
it would be utterly scorned.
Posted by Here, There be a Writer at 10:52 AM