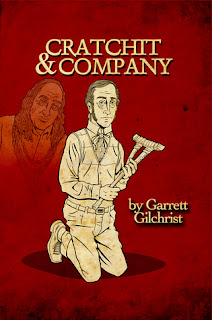 Did you ever want to know what happened to Cratchit during the story of A Christmas Carol? Afterward? See him get judged by the same spirits that judged Scrooge? Would Cratchit be guilty of the same crimes  as Scrooge?

These are questions that are posed in the novel Cratchit & Company by Garrett Gilchrist. A thoroughly engaging story about what happen to Bob Cratchit  on Christmas Eve 1844. Bob is dealing with the death of his son, Tiny Tim and his cruel boss Ebeneezer Scrooge. The year is 1844 when his life is changed by three spirits. It's a story to already know, but told from not only a different perspective, but with a modern flare.

Gilchrist gives a voice to Bob, when not much is known about the lowly clerk of Scrooge & Marley's Counting House. what about his home life or what Bob really thinks of his boss. we are taken on a journey through Bob's life with familiar guides. Gilchrist's Bob's is unassuming, but is is a man with fears and hard choices that feel real and similar to some our own fears and choices. What Bob experiences, many others have experienced, whether in love or career choices. What stands out in Crachit & Company is Gilchrist's frankness about Bob and his choices. What choices he is given. And what choices he makes.

I could relate to Bob Cratchit is a way I never thought of before with the classic story, as Bob is hardly a major player there. I found I could sympathize with Bob and the choices he has to make, after seeing his own life pass before him. It is a refreshing retelling of the classic story and a healthy dash of wit thrown in for good measure.

I love characters who are broken, flawed, troubled, or not the standard type of hero, an anti-hero, if you will. Bob Cratchit is not just what Gilchrist calls an 'Everyman', he is flawed and very much broken when we meet him. He is also you, at least that is what i felt when reading it. I find Gilchrist's writing enjoyable and easy to read, while he still pays a bit of an homage to Dickens' beloved work.